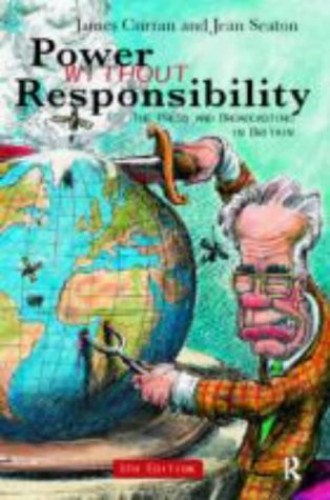 Power Without Responsibility
by James Curran

In Stock
£4.99
This book is a classic and authoritative introduction to the history, sociology, theory and politics of students and teachers of media and communication studies.
Very Good
Only 1 left

Power Without Responsibility: Press, Broadcasting and the Internet in Britain by James Curran

Power Without Responsibility is a classic introduction to the history, sociology, theory and politics of the media in Britain.
It is an essential guide, both for students and teachers of media and communication studies, and for all those involved in the production and consumption of the media.
The new edition has been substantially revised to bring it right up-to-date with developments in the media industry, new media technologies and changes in the political and academic debates surrounding media policy. In this new edition, the authors consider:
* whether we are on the threshold of a new communications revolution
* the role of global media empires
* the rise of video, cable and satellite
* the global information society and contradictions in media policy
* the BBC and broadcasting at the end of the 1990s
* the evolving relationship of the press and the Conservative party.
Assessing the press and broadcasting at a time of radical change, the authors suggest a manifesto for media reform.

Part 1 Press History 1. Whig press history as political mythology 2. The struggle for a free press 3. The ugly face of reform 4. The industrialization of the press 5. The era of the press barons 6. The press under public regulation 7. The press in the age of conglomerates Part 2 Broadcasting History 8. Reith and the denial of politics 9. Broadcasting and the blitz 10. Social revolution? 11. The fall of the BBC 12. Class, taste and profit 13. How the audience is made 14. Video, cable and the satellite 15. To be or not to be in the BBC: broadcasting in the 1980s and 1990s Part 3 Theories of the media 16. Global futures, the information society, and broadcasting 17. The sociology of the mass media 18. The liberal theory of press freedom 19. Broadcasting and the theory of public service Part 4 Politics of the media 20. Contradictions in media policy 21. Palette of policies 21. Media reform

GOR001197161
Power Without Responsibility: Press, Broadcasting and the Internet in Britain by James Curran
James Curran
Used - Very Good
Paperback
Taylor & Francis Ltd
1997-09-04
432
0415114071
9780415114073
N/A
Book picture is for illustrative purposes only, actual binding, cover or edition may vary.
This is a used book - there is no escaping the fact it has been read by someone else and it will show signs of wear and previous use. Overall we expect it to be in very good condition, but if you are not entirely satisfied please get in touch with us.