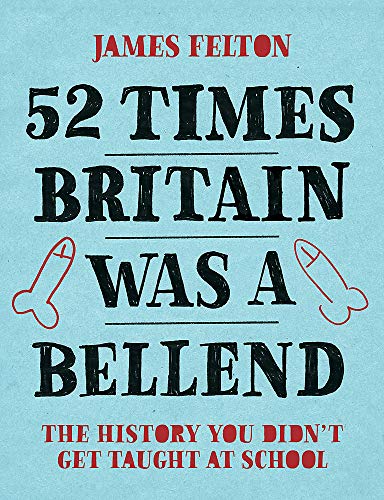 52 Times Britain was a Bellend
by James Felton

In Stock
9,99 £
The painfully funny history of Britain you were never taught at school, chronicling some of the ludicrous things the British have done to the world since time immemorial - and then conveniently forgetting we've done them, of course.
Very Good
Only 1 left

52 Times Britain was a Bellend Summary

52 Times Britain was a Bellend: The History You Didn't Get Taught At School by James Felton

Twitter hero James Felton brings you the painfully funny history of Britain you were never taught at school, fully illustrated and chronicling 52 of the most ludicrous, weird and downright 'baddie' things we Brits* have done to the world since time immemorial - before conveniently forgetting all about them, of course. Including:

52 TIMES BRITAIN WAS A BELLEND will complete your knowledge of this sceptred isle in ways you never expected. So if you've ever wondered how we put the 'Great' in 'Great Britain', wonder no more . . .

*And when we say British, for the most part we unfortunately just mean the English.

52 Times Britain was a Bellend Reviews

Scurrilous, scandalous and frequently disgusting. I absolutely loved it -- James O'Brien
James never fails to make me laugh and then think, then laugh some more -- Dermot O'Leary
Awfully hilarious about the hilariously awful. Confirms everything everyone whispers behind our backs, except funnier -- Danny Wallace
James Felton makes me laugh like a bellend -- Robert Webb
Warning: may provoke huge laughs and some feelings of shame -- David Schneider
James Felton makes me laugh every day - get into him -- Marina Hyde
James Felton is a national treasure. Although having read this book, I'm not sure that's a good thing -- Fred Delicious
Brilliant and hilarious. The perfect book for a nation built on arseholes -- Emma Kennedy

James Felton is a writer and journalist, whose articles regularly appear in the Guardian, Independent, Daily Mash and IFL Science. As a writer for television, his work includes the BAFTA award-winning The Dog Ate My Homework. Through his twitter platform of over 200,000 followers and counting, he is a well-known narrator of the Brexit crisis, averaging around 150,000 retweets a month.

GOR010217105
52 Times Britain was a Bellend: The History You Didn't Get Taught At School by James Felton
James Felton
Used - Very Good
Hardback
Little, Brown Book Group
2019-10-17
128
0751578851
9780751578850
N/A
Book picture is for illustrative purposes only, actual binding, cover or edition may vary.
This is a used book - there is no escaping the fact it has been read by someone else and it will show signs of wear and previous use. Overall we expect it to be in very good condition, but if you are not entirely satisfied please get in touch with us.