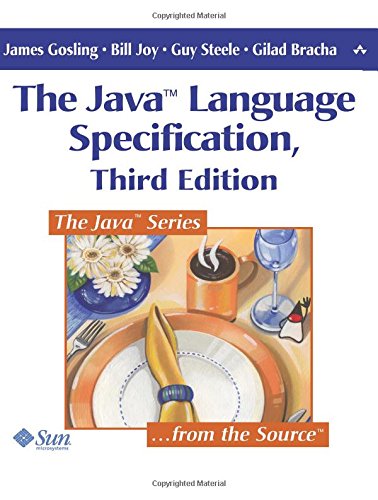 Written by the inventors of the technology, The Java (TM) Language Specification, Third Edition, is the definitive technical reference for the Java (TM) programming language. If you want to know the precise meaning of the language's constructs, this is the source for you.

James Gosling is a Fellow and Chief Technology Officer of Sun's Developer Products group, the creator of the Java programming language, and one of the computer industry's most noted programmers. He is the 1996 recipient of Software Development's "Programming Excellence Award." He previously developed NeWS, Sun's network-extensible window system, and was a principal in the Andrew project at Carnegie Mellon University, where he earned a Ph.D. in computer science.

Bill Joy is a cofounder of Sun Microsystems, where he led the company's technical strategy until September 2003, working on both hardware and software architecture. He is well known as the creator of the Berkeley version of the UNIX (R) operating system, for which he received a lifetime achievement award from the USENIX Association in 1993. He received the ACM Grace Murray Hopper Award in 1986. Joy has had a central role in shaping the Java programming language. He joined KPCB as Partner in January 2005.

Guy L. Steele Jr. is a Sun Fellow at Sun Microsystems Laboratories, where he is responsible for research in language design and implementation strategies, parallel algorithms, and computer arithmetic. He is well known as the cocreator of the Scheme programming language and for his reference books for the C programming language (with Samuel Harbison) and for the Common Lisp programming language. Steele received the ACM Grace Murray Hopper Award in 1988 and was named an ACM Fellow in 1994, a member of the National Academy of Engineering in 2001, and a fellow of the American Academy of Arts and Science in 2002. He also received the 1996 ACM SIGPLAN Programming Languages Achievement Award and the 2005 Dr. Dobb's Journal Excellence in Programming Award.

Gilad Bracha is Computational Theologist at Sun Microsystems, and a researcher in the area of object-oriented programming. Prior to joining Sun, he worked on Strongtalk, (TM) the Animorphic Smalltalk System. He holds a B.S. in mathematics and computer science from Ben Gurion University in Israel and a Ph.D. in computer science from the University of Utah.

Preface to the Second Edition.

Preface to the Third Edition.

Relationship to Predefined Classes and Interfaces.

The Kinds of Types and Values.

Where Types Are Used.

Scope of a Declaration.

Determining the Meaning of a Name.

An Array of Characters is Not a String.

The Causes of Exceptions.

Handling of an Exception.

An Example of Exceptions.

Linking of Classes and Interfaces.

Initialization of Classes and Interfaces.

Unloading of Classes and Interfaces.

The Form of a Binary.

What Binary Compatibility Is and Is Not.

Normal and Abrupt Completion of Statements.

Type of an Expression.

Normal and Abrupt Completion of Evaluation.

Non-atomic Treatment of double and long.

The Grammar of the Java Programming Language.

GOR005044685
The Java Language Specification by James Gosling
James Gosling
Used - Very Good
Paperback
Pearson Education (US)
2005-06-14
688
0321246780
9780321246783
N/A
Book picture is for illustrative purposes only, actual binding, cover or edition may vary.
This is a used book - there is no escaping the fact it has been read by someone else and it will show signs of wear and previous use. Overall we expect it to be in very good condition, but if you are not entirely satisfied please get in touch with us.