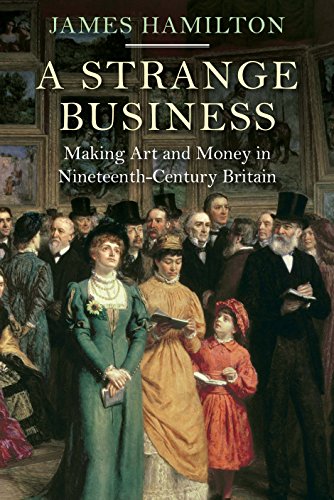 A Strange Business by James Hamilton

From the author of the acclaimed biography of Turner comes a major new work that explores the relationship between art and business in nineteenth-century Britain.

A Strange Business: Making Art and Money in Nineteenth-Century Britain by James Hamilton

Britain in the nineteenth century saw a series of technological and social changes which continue to influence and direct us today. Its reactants were human genius, money and influence, its crucibles the streets and institutions, its catalyst time, its control the market.

In this rich and fascinating book, James Hamilton investigates the vibrant exchange between culture and business in nineteenth-century Britain, which became a centre for world commerce following the industrial revolution. He explores how art was made and paid for, the turns of fashion, and the new demands of a growing middle-class, prominent among whom were the artists themselves.

While leading figures such as Turner, Constable, Landseer, Coleridge, Wordsworth and Dickens are players here, so too are the patrons, financiers, collectors and industrialists; lawyers, publishers, entrepreneurs and journalists; artists' suppliers, engravers, dealers and curators; hostesses, shopkeepers and brothel keepers; quacks, charlatans and auctioneers.

Hamilton brings them all vividly to life in this kaleidoscopic portrait of the business of culture in nineteenth-century Britain, and provides thrilling and original insights into the working lives of some of our most celebrated artists.

Money and art are so tightly intertwined that we forget there was a time when the embrace was not quite so fierce... This is a persuasive and discursive account of how we got this way. * Sunday Times, Art Book of the Year *
A beautifully written cultural history and a compendium of scurrilously funny stories -- Lucy Hughes-Hallett * Observer, Books of the Year *
One of the best works of art history for years - a riveting account of how Constable, Turner and contemporaries made (or failed to make) their money. -- Philip Hensher * Spectator, Books of the Year *
Groundbreaking... a scholarly but humane, and richly enjoyable, survey of the symbiotic relationship between art and money in 19th-century Britain -- David Kynaston * Observer, Books of the Year *
A scholarly but also enjoyably anecdote-studded guide to the 19th-century London art world. The accounts of the eccentricity and rapacity of artists and collectors alike make one mutter "plus ca change". -- Martin Gayford * Spectator, Books of the Year *
A brilliantly engaging account of the most interesting of all subjects: how artists make their money, in this case in 19th-century England. -- Philip Hensher * Guardian, Books of the Year *
Wonderful... If you were setting out as an artist in 19th-century London, this is the book you would want as your vade mecum... Full of interesting ideas and odd apercus... Entirely joyous -- Lynn Barber * Sunday Times *
To read this book is as pleasurable as a long lunch with a first-rate raconteur... Hamilton writes beautifully... Seldom have I learnt so much from a single book while simultaneously being so excellently entertained. -- Lucy Hughes-Hallett * The Times *
Hamilton's fascinating and richly researched book surveys the art world from a number of different angles... It is lucid, insightful and simply gripping... This is a brilliant account of learning, or failing, to survive in a market of extraordinary brutality. -- Philip Hensher * Spectator *
A great sweep of a book, gathering numerous colourful studies of painters, engravers and sculptors, as well as patrons, dealers and members of the spectating public. -- Seamus Perry * Literary Review *
Entertaining and original ... As a whole, like a plum pudding, this book is both nourishing and full of succulent bits and pieces. -- Martin Gayford * Daily Telegraph *
A gripping story not of artistic movements but of practicalities: who bought the art, who copied it, and how much difference new paint colours made... Hamilton is terrific on the story of how pigment production moved into the new scientific age -- Kathryn Hughes * Guardian *
Hamilton is a lucid and frequently droll guide to this symbiotic world. His book is not about paintings but about the trades such as curating, pigment-making and publishing that grew up around them. There was plenty of colour off the canvas, too. * Mail on Sunday *
Any number of novelists and historians could find inspiration in this vivid account of how the audience for art in Britain broadened during the nineteenth century... This is grand entertainment as well as serious history. -- Evelyn Toynton * Prospect *
Fascinating, compelling and timely. * Art Quarterly *
James Hamilton is an art historian and biographer. He was formerly Alistair Horne Fellow at St Antony's College, Oxford, and University Curator at the University of Birmingham, where he is Hon. Reader in History of Art. He has curated many exhibitions in galleries in Britain and abroad, from Wilhelm Lehmbruck (1974) to Turner and the Scientists (1998), Turner's Britain (2003), Turner and Italy (2008) and Volcano (2010). His biography of Turner was shortlisted for the James Tait Black Memorial Award.
GOR011442529
9781848879249
1848879245
A Strange Business: Making Art and Money in Nineteenth-Century Britain by James Hamilton
James Hamilton
Used - Like New
Hardback
Atlantic Books
2014-08-07
400
Short-listed for APOLLO AWARD 2014 (UK) Long-listed for ART BOOK PRIZE 2014 (UK)
Book picture is for illustrative purposes only, actual binding, cover or edition may vary.
The book has been read, but looks new. The book cover has no visible wear, and the dust jacket is included if applicable. No missing or damaged pages, no tears, possible very minimal creasing, no underlining or highlighting of text, and no writing in the margins
Trustpilot