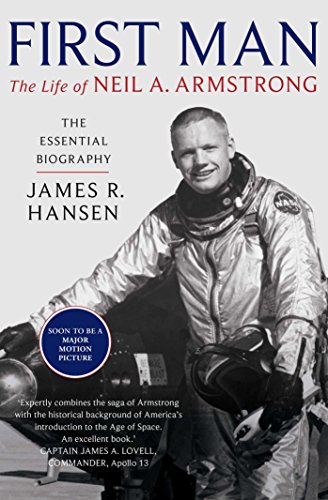 First Man: The Life of Neil Armstrong by James Hansen

First Man: The Life of Neil Armstrong by James Hansen

Soon to be a major motion picture, First Man by James Hansen offers the only authorized glimpse into the life of America's most famous astronaut, Neil Armstrong - the man whose "one small step" changed history.

In First Man, Hansen explores the life of Neil Armstrong. Based on over 50 hours of interviews with the intensely private Armstrong, who also gave Hansen exclusive access to private documents and family sources, this "magnificent panorama of the second half of the American twentieth century" (Publishers Weekly, Starred Review) is an unparalleled biography of an American icon.

When Apollo 11 touched down on the moon's surface in 1969, the first man on the moon became a legend. Hansen vividly recreates Armstrong's career in flying, from his seventy-eight combat missions as a naval aviator flying over North Korea to his formative transatmospheric flights in the rocket-powered X-15 to his piloting Gemini VIII to the first-ever docking in space. For a pilot who cared more about flying to the Moon than he did about walking on it, Hansen asserts, Armstrong's storied vocation exacted a dear personal toll, paid in kind by his wife and children. In the years since the Moon landing, rumors swirled around Armstrong concerning his dreams of space travel, his religious beliefs, and his private life.

This book reveals the man behind the myth. In a penetrating exploration of American hero worship, Hansen addresses the complex legacy of the First Man, as an astronaut and as an individual. In First Man, the personal, technological, epic, and iconic blend to form the portrait of a great but reluctant hero who will forever be known as history's most famous space traveler.
'Let it be said at once that his book is an outstanding success. It has been immaculately researched and is packed with detail, but written in a way that will appeal to readers of all kinds...this is an important book, and should be in every scientific library.' -- Sir Patrick Moore * Times Higher Educational Supplement *
`The man was a fine engineer, a good pilot - although there is some dispute about that - patriotic, cool, courageous and hard-working, just the sort of guy you want next to you when the chips are down.' * Sunday Times *
'Although he was the first man to set foot on the moon, Neil Armstrong has always been the least public of the Apollo 11 astronauts. He has seldom given interviews, or lent his name to merchandising tat, or haunted the same professional old-boy circuit as his former colleagues... But at 75, he's finally decided to break his silence - or to have it broken for him by his official biographer, James R.Hansen.' * Sunday Telegraph *
'To understand Armstrong on his own terms is to see a large truth of our time...[Hansen's] mastery of detail is put to splendid use. The narrative of the moon mission is crisp and dramatic, the science clear. He deftly takes us back into those few days of global fascination with the adventure of the three distant voyagers and the tense uncertainty about how it would turn out...I finished Hansen's Apollo story with a wholly fresh sense of awe at the magnitude of NASA's achievement...a compelling and nuanced portrait of the astronaut.' -- James Tobin * Chicago Tribune *
'Neil Armstrong-naval aviator, research pilot, astronaut, American hero and larger-than-life icon. He may have thought it was "one small step for [a] man," but it was one giant leap for the rest of us...First Man is primed to be one of the definitive reference works on the lunar program.' -- U.S. Navy Captain William Readdy * Aviation Week & Space Technology *
'Most of the astronauts' books are about the adventure. Jim Hansen's well researched and documented book is about the adventurer. First Man is a compelling story of a modern-day Columbus which provides the rare opportunity to understand the personal qualities driving explorers. Quiet, complex, and deep, Armstrong, as fuel was running out, was the right man at the right time to take America and the world to the surface of the moon.' -- Eugene F. Kranz, author of Failure Is Not an Option
'A powerful, unrelenting biography of a man who stands as a living testimony to everyday grit and determination... A must for astronaut buffs and history readers alike.' * Publishers Weekly *
'Ever since Apollo 11's "one giant leap for mankind" in 1969 the world has wondered who Neil Armstrong really is. Now, at last, Jim Hansen has stripped away the myths and mysteries to bring us face to face with the man himself. This definitive portrait offers many new and fascinating details about Armstrong and his life and about the momentous and unforgettable era of exploration in which he was lucky enough-and talented enough-to play a key role.' -- Andrew Chaikin, author of A Man on the Moon
'This impressively documented and engagingly written biography will stand the test of time.' * Library Journal *
'Masterfully written...technically accurate, scholarly yet independent and accessible...Mission accomplished and a perfect touchdown.' -- Leonard David * Ad Astra, The Magazine of the National Space Society *
'Hansen's research is staggeringly impressive... A work that has great appeal for anyone interested in why we explore, who we are in this aerospace age, and what it was about the United States that could enable a little kid from Wapakoneta, Ohio, to take that "one small step" at Tranquility Base in the summer of 1969. A must read!' -- Richard P. Hallion, chief historian for the U.S. Air Force
'Jim Hansen has captured the essence of Neil Armstrong, not only as the first man on the Moon, but also as an outstanding aviator and astronaut. I was there for Neil's other major "space step"-he recovered Gemini 8 from the ultimate end game with aggressive action, cool skill and creative judgement seldom performed in any aviation or space endeavor. Just 16 days after the deaths of the Gemini 9 crew, he probably saved the Moon. Jim Hansen has written an exceptional and accurate account of a unique period in aerospace history and the adventures of Neil Armstrong.' -- Dave Scott, Gemini VIII, Apollo 9, Commander, Apollo 15
A former historian for NASA, Hansen is the author of eight books on the history of aerospace. He previously was a professor of history at Auburn University. He lives in Auburn, Alabama.
GOR010360692
9781471177873
1471177874
First Man: The Life of Neil Armstrong by James Hansen
James Hansen
Used - Like New
Paperback
Simon & Schuster Ltd
2018-05-29
464
N/A
Book picture is for illustrative purposes only, actual binding, cover or edition may vary.
The book has been read, but looks new. The book cover has no visible wear, and the dust jacket is included if applicable. No missing or damaged pages, no tears, possible very minimal creasing, no underlining or highlighting of text, and no writing in the margins
Trustpilot