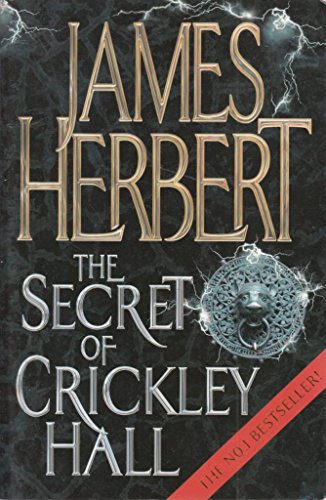 The Secret of Crickley Hall
by James Herbert

Used Price
£2.99
New RRP £9.99
Free Shipping in the UK
Would you stay in a haunted house for more than one night? The Caleighs had their reasons, but the secret of Crickley Hall soon fills their nightmares.
Very Good Good

The Secret of Crickley Hall Summary

The Secret of Crickley Hall by James Herbert

The Caleighs have had a terrible year... They need time and space, while they await the news they dread. Gabe has brought his wife, Eve, and daughters, Loren and Cally, down to Devon, to the peaceful seaside village of Hollow Bay. He can work and Eve and the kids can have some peace and quiet and perhaps they can try, as a family, to come to terms with what's happened to them...

Crickley Hall is an unusually large house on the outskirts of the village at the bottom of Devil's Cleave, a massive tree-lined gorge - the stuff of local legend. A river flows past the front garden. It's perfect for them... if a bit gloomy. And Chester, their dog, seems really spooked at being away from home. And old houses do make sounds. And it's constantly cold. And even though they shut the cellar door every night, it's always open again in morning...

The Secret of Crickley Hall is James Herbert's Number One bestseller. It explores the darker, more obtuse territories of evil and the supernatural. With brooding menace and rising tension, he masterfully and relentlessly draws the reader through to the ultimate revelation - one that will stay to chill the mind long after the book has been laid aside.

The Secret of Crickley Hall Reviews

This is a powerfully disturbing read...two pages in, the reader is hooked, and Herbert has done his job. The horror. The horror. * Guardian *
A literary Steven Spielberg * Sunday Times *
A chilling classic haunted house tale -- Publishers Weekly, starred review

A new James Herbert novel is always a mesmerizing experience

GOR000512858
The Secret of Crickley Hall by James Herbert
James Herbert
Used - Very Good
Paperback
Pan Macmillan
2007-05-04
640
0330411683
9780330411684
N/A
Book picture is for illustrative purposes only, actual binding, cover or edition may vary.
This is a used book - there is no escaping the fact it has been read by someone else and it will show signs of wear and previous use. Overall we expect it to be in very good condition, but if you are not entirely satisfied please get in touch with us.