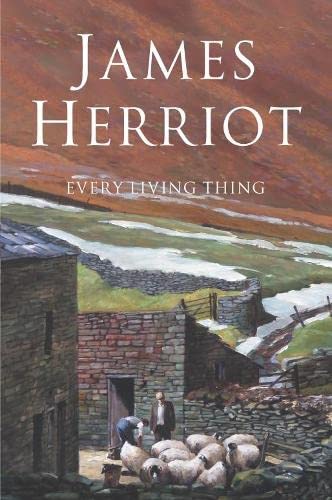 Every Living Thing
by James Herriot

In Stock
£4.49
Filled with story-telling magic and revealing more of the real James Herriot than ever before
Very Good
5 in stock

Every Living Thing: The Classic Memoirs of a Yorkshire Country Vet by James Herriot

James Herriot has captivated millions of readers and television viewers with tales of the triumphs, disasters, pride and sometimes heartache that filled his life as a vet in the Yorkshire Dales. Every Living Thing shines with the captivating storytelling that has made James Herriot a favourite the world over.

Here is a book for all those who find laughter and joy in animals, and who know and understand the magic of wild places and beautiful countryside.

'He can tell a good story against himself, and his pleasure in the beauty of the countryside in which he works is infectious' Daily Telegraph

'Full of warmth, wisdom and wit' The Field

'It is a pleasure to be in James Herriot's company' Observer

James Herriot, a pseudonym for James Alfred Wight, grew up in Glasgow and qualified as a veterinary surgeon at Glasgow Veterinary College. Shortly afterwards he took up a position as an assistant in a North Yorkshire practice where he remained, with the exception of his wartime service in the RAF, until his death in 1995. He wrote many books about Yorkshire country life, including some for children, but he is best known for his memoirs, which begin with If Only They Could Talk. The books were televised in the enormously popular series All Creatures Great and Small.

GOR001095862
Every Living Thing: The Classic Memoirs of a Yorkshire Country Vet by James Herriot
James Herriot
Used - Very Good
Paperback
Pan Macmillan
2006-04-07
384
0330443453
9780330443456
N/A
Book picture is for illustrative purposes only, actual binding, cover or edition may vary.
This is a used book - there is no escaping the fact it has been read by someone else and it will show signs of wear and previous use. Overall we expect it to be in very good condition, but if you are not entirely satisfied please get in touch with us.