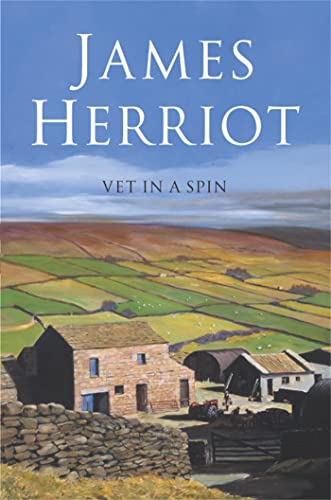 Vet in a Spin
by James Herriot

In Stock
£3.99
James Herriot has swapped his wellies for a flying jacket, but he can't wait to get back to the practice and his old Darrowby friends.
Like New Very Good
Only 1 left

Vet in a Spin Summary

Vet in a Spin by James Herriot

James Herriot, strapped into the cockpit of a Tiger Moth trainer, feels rather out of place, but he hasn't found a new profession and it surely won't be long before the RAF come round to his point of view . . .

From the author whose books inspired the BBC series All Creatures Great and Small, Vet in a Spin, James Herriot's sixth volume of unforgettable memoirs sees him dreaming of the day when he can rejoin his wife Helen, little son Jimmy, veterinary partner Siegfried, the eternal student Tristan - and all the old Darrowby cows, both two-legged and four.

Vet in a Spin Reviews

He can tell a good story against himself, and his pleasure in the beauty of the countryside in which he works is infectious. * The Daily Telegraph *
Full of warmth, wisdom and wit' The Field 'It is a pleasure to be in James Herriot's company. * Observer *

GOR010564144
Vet in a Spin by James Herriot
James Herriot
Used - Like New
Paperback
Pan Macmillan
2006-04-07
224
0330443577
9780330443579
N/A
Book picture is for illustrative purposes only, actual binding, cover or edition may vary.
The book has been read, but looks new. The book cover has no visible wear, and the dust jacket is included if applicable. No missing or damaged pages, no tears, possible very minimal creasing, no underlining or highlighting of text, and no writing in the margins.