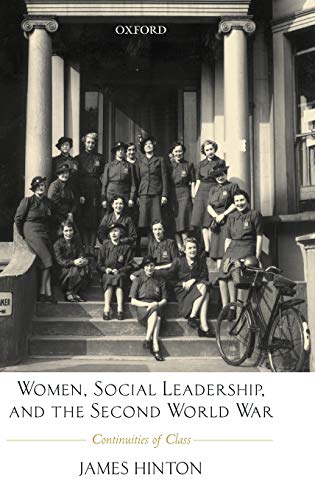 In Stock
£6.99
Questioning the view that the Second World War served to democratize English society, this work shows how the war enabled middle-class social leaders to reinforce their claims to authority. It reconstructs portraits of local female social leadership in contrasting settings across provincial England.
Very Good
Only 1 left

Women, Social Leadership, and the Second World War: Continuities of Class by James Hinton (Reader in History, University of Warwick)

The associational life of middle-class women in twentieth-century England has been largely ignored by historians. During the Second World War women's clubs, guilds, and institutes provided a basis for the mobilization of up to a million women, mainly housewives, into unpaid part-time work. Women's Voluntary Service, which was set up by the Government in 1938 to organize this work, generated a rich archive of reports and correspondence which provide the social historian with a unique window into the female public sphere. Questioning the view that the Second World War served to democratize English society, James Hinton shows how the war enabled middle-class social leaders to reinforce their claims to authority. Displaying 'character' through their voluntary work, the leisured women at the centre of this study made themselves indispensable to the war effort. James Hinton delineates these 'continuities of class', reconstructing intimate portraits of local female social leadership in contrasting settings across provincial England (towns large and small, shire counties, the Durham coalfield), tracing complex and often acerbic rivalries within the voluntary sector, and uncovering gulfs of mutual distrust and incomprehension dividing publicly active women along gendered frontiers of class and party. This study reminds us how much Britain's wartime mobilization relied on a Victorian ethos of public service to cope with the profoundly un-Victorian problems of total war. The women's associations so evocatively explored here reached the apex of their effectiveness during the Second World War, sustaining an uneasy balance between voluntarism and the expanding power of the state. In the longer term female social leaders found themselves marginalized by bureaucracy and professionalization. The stories told here demonstrate that the Second World War changed English society far less than is often assumed. It was not until the 1950s and 1960s that practices and attitudes laid down in the nineteenth century finally lost their purchase.

In the elegance of its structure and its style, and in the rock-solid research base of its argument, this book is a delight, the sort of book one mgiht commend to one's students as an example of the historical monograph at its best. * Robert Mackay, Twentieth Century British History *
By adding age to the mantra of gender and class, Hinton offers a nuanced framework for further research into the significance of the role of the not-so humble housewife. * Stephanie Spencer, Reviews in History *
A refreshing social study of an unhackneyed subject. * Northern History *

GOR010203521
Women, Social Leadership, and the Second World War: Continuities of Class by James Hinton (Reader in History, University of Warwick)
James Hinton (Reader in History, University of Warwick)
Used - Very Good
Hardback
Oxford University Press
2002-12-01
280
0199243298
9780199243297
N/A
Book picture is for illustrative purposes only, actual binding, cover or edition may vary.
This is a used book - there is no escaping the fact it has been read by someone else and it will show signs of wear and previous use. Overall we expect it to be in very good condition, but if you are not entirely satisfied please get in touch with us.