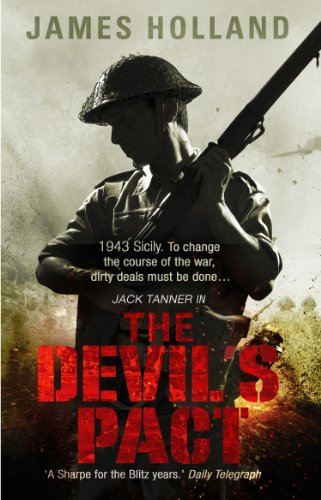 The Devil's Pact
by James Holland

Used Price
£5.49
New RRP £9.99
Free Shipping in the UK
Promotion to Company Commander has brought trouble for Jack Tanner. Not only has his Battalion Commander decided to make his life as difficult as possible, they soon find themselves battling against some of the toughest, most determined troops in the Wehrmacht. In the bitter fighting that follows, Tanner witnesses a new reality.
Reviews:
Trustpilot
Very Good

The Devil's Pact by James Holland

Sicily, 1943 - to fight the Nazi rearguard, old foes like the Mafia must become new friends for Jack Tanner and his crew...

July 1943: with North Africa secured, the Allies launch an invasion of Sicily, and the 2nd Battalion, King's Own Yorkshire Rangers are in the vanguard of the assault on the Italian beaches.

But promotion to Company Commander has brought fresh trouble for Jack Tanner. Not only has his new Battalion Commander decided to make his life as difficult as possible, they soon find themselves battling against some of the toughest, most determined troops in the Wehrmacht.

In the bitter fighting that follows, Tanner witnesses a new reality. Forced to question the cause for which they have fought so long, Tanner and his trusted sidekick, Sykes, find themselves embroiled in a deeply personal fight, in which they have to use all their resolve, skill and experience if they are to stand any chance of survival...

GOR005869036
The Devil's Pact by James Holland
James Holland
Jack Tanner
Used - Very Good
Paperback
Transworld Publishers Ltd
2014-04-10
448
0552158011
9780552158015
N/A
Book picture is for illustrative purposes only, actual binding, cover or edition may vary.
This is a used book - there is no escaping the fact it has been read by someone else and it will show signs of wear and previous use. Overall we expect it to be in very good condition, but if you are not entirely satisfied please get in touch with us.