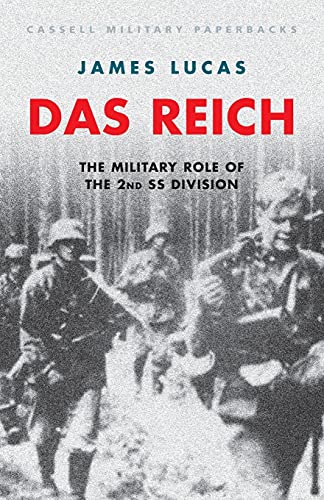 In Stock
£7.99
This is the remarkable and courageous war record of the famous Das Reich 2nd SS Division, a fearsome unit which saw heavy fighting throughout the war, from France to the Eastern Front and back to Germany.
Like New Very Good
Only 1 left

The remarkable and courageous war record of the famous Das Reich 2nd SS Division, a fearsome unit which saw heavy fighting throughout the war, from France to the Eastern Front and back to Germany.

The 2nd SS Division was an elite, highly trained, volunteer fighting force, the premier Division of the Waffen SS and far removed from the more familiar SS Nazi Police role. Driven always by the military virtues of courage, duty and loyalty, it saw action in some of the bloodiest battles of the war, in particular on the Eastern Front. It fought a hard war, suffered terrible casualties, and set new standards of battlefield excellence. Through extensive research, James Lucas tells a gripping story of close quarter hand-to-hand combat, of commanders who led from the front, of camaraderie and unit pride.

This is a book about the best of soldiers in the worst of times.

James Lucas fought with the British infantry in the Second World War. He has since established a reputation as a military historian with a particular interest in good soldiering; Das Reich is one of a number of his books about his former enemy.

GOR010565675
Das Reich by James Lucas
James Lucas
Used - Like New
Paperback
Orion Publishing Co
1999-08-05
224
0304351997
9780304351992
N/A
Book picture is for illustrative purposes only, actual binding, cover or edition may vary.
The book has been read, but looks new. The book cover has no visible wear, and the dust jacket is included if applicable. No missing or damaged pages, no tears, possible very minimal creasing, no underlining or highlighting of text, and no writing in the margins.