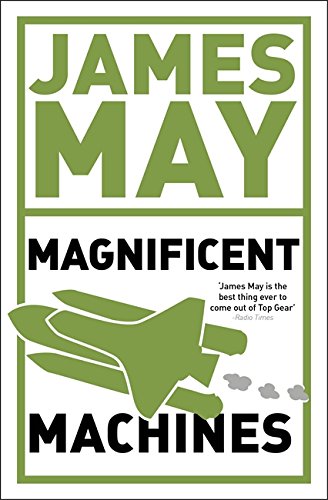 James May's idiosyncratic look at the great inventions of our time

James May's Magnificent Machines: How men in sheds have changed our lives by James May

Our world has been transformed beyond recognition, particularly in the twentieth century, and so were our lives and our aspirations. Throughout JAMES MAY'S MAGNIFICENT MACHINES James May, co-presenter of The Grand Tour, explores the iconic themes of the past hundred years: flight, space travel, television, mechanised war, medicine, computers, electronic music, skyscrapers, electronic espionage and much more. But he also reveals the hidden story behind why some inventions like the Zeppelin, the hovercraft or the Theremin struggled to make their mark. He examines the tipping points - when technologies such as the car or the internet became unstoppable - and gets up close to the nuts and bolt of remarkable inventions. Packed with surprising statistics and intriguing facts, this is the ideal book for anyone who wants to know how stuff works and why some stuff didn't make it.

'James May is the best thing ever to come out of Top Gear' * Radio Times *
'Smart, sharply written' * Guardian *
'The most loveable of the Top Gear presenting trio . . . there's a sharp and interesting mind under the corduroy. Fascinating.' * Nottingham Evening Post *

James May (Author)
James May is a writer, broadcaster and co-host of The Grand Tour on Amazon Prime. He has presented series for the BBC, ITV, Channel 4 and Sky. His previous books include James May's Man Lab, Car Fever and How to Land an A330 Airbus.

Phil Dolling (Author)
Phil Dolling is an award-winning Executive Producer for BBC Science and History, and has worked on many series including Hannibal, Egypt, Genghis Khan, Human Instinct and Space.

GOR001153936
James May's Magnificent Machines: How men in sheds have changed our lives by James May
James May
Used - Very Good
Paperback
Hodder & Stoughton General Division
2008-05-15
336
0340950927
9780340950920
N/A
Book picture is for illustrative purposes only, actual binding, cover or edition may vary.
This is a used book - there is no escaping the fact it has been read by someone else and it will show signs of wear and previous use. Overall we expect it to be in very good condition, but if you are not entirely satisfied please get in touch with us.