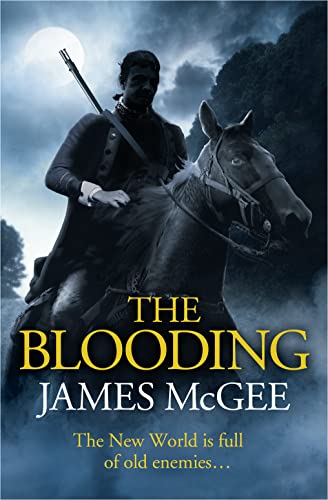 The Blooding by James McGee

Hawkwood's in America for this gripping, action-packed follow up to the bestselling Ratcatcher - for fans of Bernard Cornwell, Conn Igulden and Patrick O'Brian

The Blooding by James McGee

Hawkwood's in America for this gripping, action-packed follow up to the bestselling Ratcatcher - for fans of Bernard Cornwell, Conn Igulden and Patrick O'Brian

DECEMBER, 1812
Britain is locked in a bitter war with America and Matthew Hawkwood, soldier turned spy, is stranded behind enemy lines.

A TERRIFYING PLOT
Hawkwood heads for the Canadian border, along with former comrade-in-arms, Major Douglas Lawrence. But as they men make their escape, the two men uncover a plot that could turn the British Empire to dust.

A PERILOUS JOURNEY
Pursued by a relentless enemy, Hawkwood and Lawrence set off across the Adirondack Mountains. But they are not alone. Buried deep in Hawkwood's past is an old alliance - one which could save both their lives and turn the tide of war...

James McGee was born into an army family. He was educated in Gibraltar, Germany and Belfast. His career has encompassed banking, bookselling and thirteen years in the airline business. He has also presented book reviews for BBC local radio and several independent stations. In addition to the successful Hawkwood series, he has also written several thrillers. He lives in Somerset.

GOR006690894
9780007320141
0007320140
The Blooding by James McGee
James McGee
Used - Very Good
Paperback
HarperCollins Publishers
2015-01-15
496
N/A
Book picture is for illustrative purposes only, actual binding, cover or edition may vary.
This is a used book - there is no escaping the fact it has been read by someone else and it will show signs of wear and previous use. Overall we expect it to be in very good condition, but if you are not entirely satisfied please get in touch with us
Trustpilot