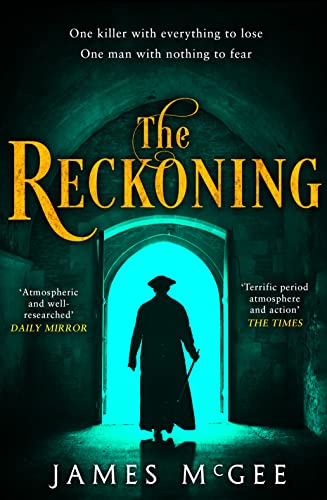 The Reckoning
by James McGee

One killer with everything to lose. One man with nothing to fear.

The Reckoning by James McGee

One killer with everything to lose. One man with nothing to fear.

London, 1813: Bow Street Runner Matthew Hawkwood is summoned to a burial ground and finds the corpse of a young woman, murdered and cast into an open grave.

At first the death is deemed to be of little consequence. But when Chief Magistrate James Read receives a direct order from the Home Office to abandon the case, Hawkwood's interest is piqued.

His hunt for the killer will lead him from London's backstreets into the heart of a government determined to protect its secrets at all costs. Only Hawkwood's contacts within the criminal underworld can now help.

As the truth behind the girl's murder emerges, setting in motion a deadly chain of events, Hawkwood learns the true meaning of loyalty - and that the enemy is much closer to home than he ever imagined...

`Ratcatcher is a richly enjoyable and impressively researched novel - also very gripping. James McGee is clearly a rising star in the historical galaxy and I look forward to Hawkwood's return' Andrew Taylor, author of The Ashes of London

`Hawkwood's a hero to root for... Captivating action, page upon page, from a Regency era Bond or Bourne' Kirkus Reviews

James McGee has worked in banking, sales, newspapers, the airline industry and bookselling. His interest in the Napoleonic period dates back to his first reading of C.S. Forester's The Gun. This is the sixth in a series of books featuring Matthew Hawkwood.

GOR009250273
The Reckoning by James McGee
James McGee
Used - Very Good
Paperback
HarperCollins Publishers
2018-08-09
400
0007320108
9780007320103
N/A
Book picture is for illustrative purposes only, actual binding, cover or edition may vary.
This is a used book - there is no escaping the fact it has been read by someone else and it will show signs of wear and previous use. Overall we expect it to be in very good condition, but if you are not entirely satisfied please get in touch with us.