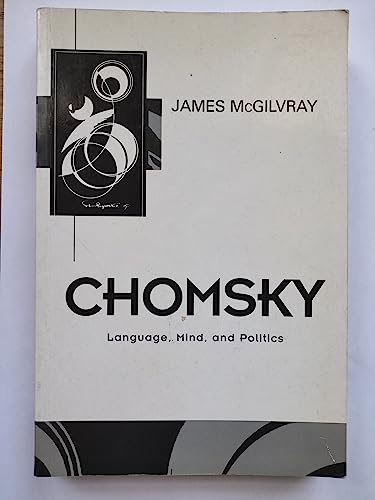 In Stock
£12.99
A clear and comprehensive introduction to Chomsky's work, dealing with his contributions to linguistics, philosophy, social and political thought.
Describes Chomsky's rationalist view of mind and human nature in a more systematic way than Chomsky himself has and investigates why this view is the most plausible one.
Very Good
Only 1 left

The key to Chomsky's overall intellectual project lies in what he has to say about a biologically based human nature.

a This is the best all around introduction to Chomskya s work that I know of. However, it is far more than an introduction. It is an ambitious synthesis of all parts of Chomskya s views written in a manner accessible to a beginner yet thought provoking for those deeply immersed in Chomskyana. It considers Chomskya s work in the wider context of cultural and classical philosophical views on human nature, knowledge and mind. In addition, McGilvray shuns no part of Chomskya s vast work. He provides accessible and illuminating discussions of both his theoretical work in grammar, his philosophical views on the structure of mind and his political views. I recommend McGilvraya s work both to neophytes interested in an introduction to Chomskya s thought and to experts interested in an illuminating discussion of "how it all hangs together".a Professor Norbert Hornstein, University of Maryland a This well written and insightful book explains accurately Chomskya s ideas about mind, language, and social ideas. Its presentation of key concepts is accessible to laypersons and is informative to the experts as well. Chomskya s key contributions to philosophy and the social sciences are well articulated. The book should be read by the general public, and all philosophers and social scientists.a Professor Julius Moravcsik, Department of Philosophy, University of Stanford

James McGilvray is Associate Professort in the Department of Philosophy, McGill University.

3. Poverty, Creativity, and Making the World.

4. Languages and the Science of Language.

5. How to Make an Expression.

6. Meanings and Their Use.

7. Anarchosyndicalism and the Responsible Intellectual.

GOR003625252
Chomsky: Language, Mind, and Politics by James McGilvray
James McGilvray
Key Contemporary Thinkers
Used - Very Good
Paperback
Polity Press
1999-08-23
292
074561888X
9780745618883
N/A
Book picture is for illustrative purposes only, actual binding, cover or edition may vary.
This is a used book - there is no escaping the fact it has been read by someone else and it will show signs of wear and previous use. Overall we expect it to be in very good condition, but if you are not entirely satisfied please get in touch with us.