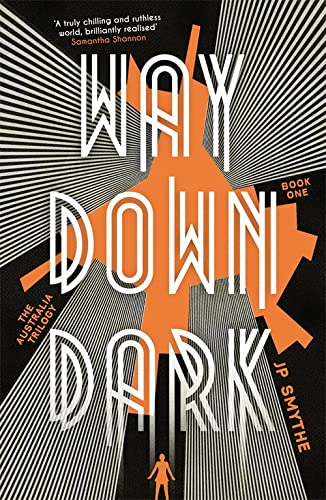 Used Price
£4.49
New RRP £7.99
Free Shipping in the UK
The first in an extraordinary new YA trilogy by James Smythe, perfect for fans of The Hunger Games and Divergent.
Reviews:
Trustpilot
Very Good Good

Imagine a nightmare from which there is no escape. Seventeen-year-old Chan's ancestors left a dying Earth hundreds of years ago, in search of a new home. They never found one.

This is a hell where no one can hide. The only life that Chan's ever known is one of violence, of fighting. Of trying to survive.

This is a ship of death, of murderers and cults and gangs. But there might be a way to escape. In order to find it, Chan must head way down into the darkness - a place of buried secrets, long-forgotten lies, and the abandoned bodies of the dead.

This is Australia. Seventeen-year-old Chan, fiercely independent and self-sufficient, keeps her head down and lives quietly, careful not to draw attention to herself amidst the violence and disorder. Until the day she makes an extraordinary discovery - a way to return the Australia to Earth. But doing so would bring her to the attention of the fanatics and the murderers who control life aboard the ship, putting her and everyone she loves in terrible danger.

And a safe return to Earth is by no means certain.

Hard-hitting, lightning-paced and beautifully written, Way Down Dark delivers a thrilling fight for survival in a world where death lurks around every corner. Fans of The Hunger Games will devour it, although they might not want to read it after dark...A dark and brutal new YA trilogy with a heroine who could whup Katniss any day of the week.When the stars align, I feel like I won a small lottery. Such is the case with James Smythe. - WiredA young writer with a preternaturally powerful and distinctive voice. - GuardianSavage, intimate, inexorable.As if Philip K Dick and David Mitchell collaborated on an episode of The West Wing. Unsettling, gripping and hugely thought-provoking.

He has been shortlisted for and won any number of prizes, including The Kitschies Red Tentacles and the Arthur C. Clarke Award.

He currently writes a continuing series of articles for The Guardian called Rereading Stephen King and teaches Creative Writing in London. He can be found on twitter @jpsmythe and Facebook.

GOR007795406
Way Down Dark: Australia Book 1 by James P. Smythe
James P. Smythe
The Australia Trilogy
Used - Very Good
Paperback
Hodder & Stoughton General Division
2016-04-07
288
144479633X
9781444796339
Short-listed for Arthur C. Clarke Award 2016
Book picture is for illustrative purposes only, actual binding, cover or edition may vary.
This is a used book - there is no escaping the fact it has been read by someone else and it will show signs of wear and previous use. Overall we expect it to be in very good condition, but if you are not entirely satisfied please get in touch with us.