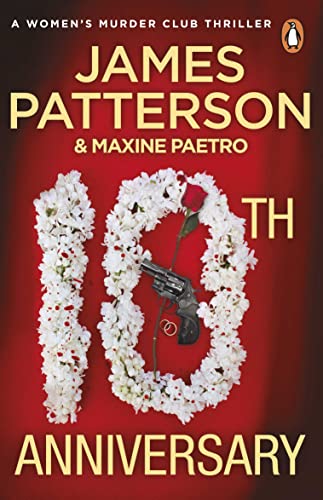 In Stock
£2.99
A BATTLE BETWEEN FRIENDSAt the same time, Assistant District Attorney Yuki Castellano - a member of the Women's Murder Club - is prosecuting the case of her life: a renowned heart surgeon accused of murdering her husband in front of their young children.
Very Good Good
12 in stock

The no. 1 bestselling 10th novel in the Women's Murder Club series A HONEYMOON INTERRUPTED Detective Lindsay Boxer has finally married her long-time boyfriend Joe. But homicide detectives don't have time for honeymoons, and she's soon back on the beat. A fifteen-year-old girl is found unconscious in the street, naked but for a cheap plastic raincoat, and haemorrhaging badly after having given birth within the last 36 hours. But her baby is nowhere to be found. A DEEPENING MYSTERY At the same time, Lindsay's close friend and fellow member of the Women's Murder Club reporter Cindy Thomas is investigating a terrifying story. Two women have reported sexual assaults, but neither can remember anything of the attacks. Are these the first of many? Cindy is determined to uncover the truth, but her headstrong approach can lead her straight into danger... A BATTLE BETWEEN FRIENDS At the same time, Assistant District Attorney Yuki Castellano - a member of the Women's Murder Club - is prosecuting the case of her life: a renowned heart surgeon accused of murdering her husband in front of their young children. The case looks like a slam dunk, even against a defence attorney specialising in defending the rich and powerful. But when Lindsay finds evidence that could destroy Yuki's case, she's forced to make a terrible choice. YOU CAN'T HAVE IT ALL...

"A fast-paced romp of a read" * Best *
"Compelling stuff" -- 4 stars * Woman's Own *
"Master writer James Patterson conjures up more literary magic in his latest crime thriller" -- 5 stars * Star Magazine *
"Gripping" * Daily Record *
"A great book to take in bite size chunks. The greedier reader can quite comfortably consume it all in one go. But does the tenth book mean the end of the line for Boxer and her friends and does Patterson see this as a logical point to call it a day on the Women's Murder Club? By the time you get to the last page you will hope he has the appetite for more." * Press Association *

GOR003541002
10th Anniversary: (Women's Murder Club 10) by James Patterson
James Patterson
Women's Murder Club
Used - Very Good
Paperback
Cornerstone
2012-03-01
512
0099525372
9780099525370
N/A
Book picture is for illustrative purposes only, actual binding, cover or edition may vary.
This is a used book - there is no escaping the fact it has been read by someone else and it will show signs of wear and previous use. Overall we expect it to be in very good condition, but if you are not entirely satisfied please get in touch with us.