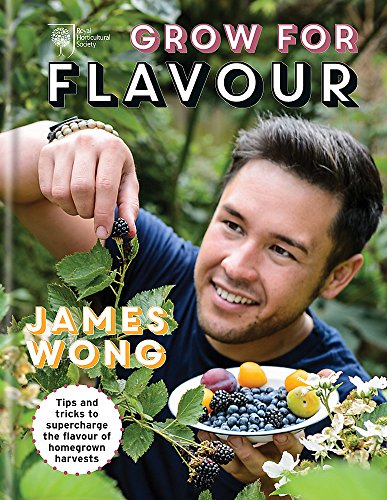 In Grow for Flavour, TV botanist and bestselling author James Wong reveals his best tried-and-tested methods for growing your own fruit and veg - specifically for great flavour.

RHS Grow for Flavour: Tips & tricks to supercharge the flavour of homegrown harvests by James Wong

Use James Wong's revolutionary tips and tricks to grow:

- Tomatoes that are 1.5 times sweeter than usual, with 50% more vitamin C
- Chillis with double the fire power
- Blueberries that are 3 times richer in antioxidants

... and that's only the beginning!

Have you ever grown a batch of lovingly nurtured tomatoes only to be disappointed by the flavour when you harvest them? Bestselling gardening writer and botanist James Wong shows you how to measurably increase the flavour of grow-your-own favourites such as sweetcorn, strawberries and tomatoes with a collection of deceptively simple tips and tricks.

Simply by growing the best-flavoured varieties and treating them just a bit meaner, you will not only get harvests with an intense flavour - but also slash the work involved. Combining cutting-edge science with overlooked traditional techniques, this ground-breaking book helps you to make the most of your crop, while at the same time revealing exciting new foodie varieties you never knew you could grow. James also provides 40 really simple recipes for delicious ways to eat what you've grown.

A kitchen garden packed full of James Wong's recommendations would make a refreshing change ... full of encouragement to take a new look at not just the contents of our vegetable plot but at our gardens as a whole. -- Praise for Homegrown Revolution * Gardens Illustrated *
This year's most original gardening book -- Praise for Homegrown Revolution * Daily Mail Weekend *

James Wong is a Kew-trained botanist, science writer and broadcaster based in London. Graduating with a Master of Science degree in Ethnobotany in 2006, he pursued his key research interests of under-utilized crop species and traditional food systems through field work in rural Ecuador, Java and southern China.

He is the author of the best-selling books Grow Your Own Drugs, Homegrown Revolution and, for Mitchell Beazley, RHS Grow for Flavour (more than 64,000 copies sold) and How to Eat Better (more than 85,000 copies sold). He has presented BBC2's award-winning series Grow Your Own Drugs and co-presented, with Dr Michael Mosley, The Secrets of Your Food - a major BBC series on the science of food. He has a column in the Observer magazine.

With his obsession for food almost eclipsing his love of plants, James's small London garden serves as a testing station for all manner of crops from around the world.

The Royal Horticultural Society (RHS) is the UK's largest gardening charity, dedicated to advancing horticulture and promoting good gardening. Its charitable work includes providing expert advice and information, training the next generation of gardeners and promoting the ecological, aesthetic and psychological benefits of gardening in an urban environment.

GOR006678394
9781845339364
1845339363
RHS Grow for Flavour: Tips & tricks to supercharge the flavour of homegrown harvests by James Wong
James Wong
Used - Very Good
Hardback
Octopus Publishing Group
2015-03-05
224
N/A
Book picture is for illustrative purposes only, actual binding, cover or edition may vary.
This is a used book - there is no escaping the fact it has been read by someone else and it will show signs of wear and previous use. Overall we expect it to be in very good condition, but if you are not entirely satisfied please get in touch with us
Trustpilot