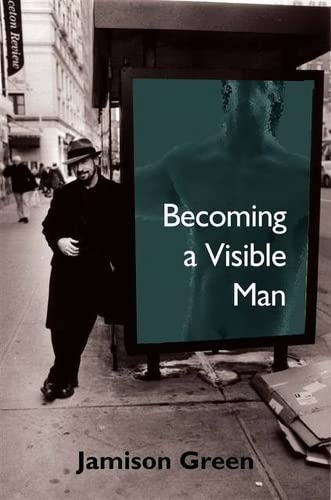 In Stock
£60.99
Written by a leading activist in the transgender movement, this is an enquiry into the politics of gender. Jamison Green combines candid autobiography with informed analysis to offer unique insight into the multiple challenges of the female-to-male transsexual experience.
Very Good
Only 1 left

Written by a leading activist in the transgender movement, Becoming a Visible Man is an artful and compelling inquiry into the politics of gender. Jamison Green combines candid autobiography with informed analysis to offer unique insight into the multiple challenges of the female-to-male transsexual experience, ranging from encounters with prejudice and strained relationships with family to the development of an FTM community and the realities of surgical sex reassignment. For more than a decade, Green has provided educational programs on gender-variance issues for corporations, law-enforcement agencies, social-science conferences and classes, continuing legal education, religious education, and medical venues. His comprehensive knowledge of the processes and problems encountered by transgendered and transsexual people - as well as his legal advocacy work to help ensure that gender-variant people have access to the same rights and opportunities as others - enable him to explain the issues as no transsexual author has previously done. Brimming with frank and often poignant recollections of Green's own experiences - including his childhood struggles with identity and his years as a lesbian parent prior to his sex-reassignment surgery - the book examines transsexualism as a human condition, and sex reassignment as one of the choices that some people feel compelled to make in order to manage their gender variance. Relating the FTM psyche and experience to the social and political forces at work in American society, Becoming a Visible Man also speaks consciously of universal principles that concern us all, particularly the need to live one's life honestly, openly, and passionately.

"Jamison Green has given a great gift--based on experience born of a great personal journey, he demystifies gender in a way that transfixes the reader. The biological journey from zygote to adulthood unfolds to challenge the neat little boxes into which our culture drives gender each day. This is an essential contribution to the growing body of literature on gender identity and expression."
--Elizabeth Birch, former Executive Director, Human Rights Campaign
"Jamison Green tells, with integrity, and in a moving and thoughtful way, his story."
--Dallas Denny, Editor, Transgender Tapestry Journal
"An intelligent and engaging book. Jamison Green, an extraordinary activist and advocate for FTM transsexuals, demonstrates that he is also an extraordinary writer. Green artfully blends the personal, the informative, and the political, and grounds it all in a generous vision of inclusive communities. He makes a thoughtful and persuasive case for making gender visible."
--Joanne Meyerowitz, author of How Sex Changed: A History of Transsexuality in the United States
"When the premier trans-activist of a generation decides to write a memoir, we should be grateful. When Jamison Green weaves his personal and political experiences into a magnificent story it is all the more reason to celebrate. Becoming a Visible Man shows why he is a leading voice to a generation of transmen and transwomen and why this issue should be on the top of the agenda for all of us in the twenty-first century."
--Henry Rubin, author of Self-Made Men

Jamison Green is currently board chair of Gender Education and Advocacy, a non-profit educational corporation, and a board member of the Transgender Law and Policy Institute and the Harry Benjamin International Gender Dysphoria Association. He has also been featured in eight documentary films and numerous articles and books. He holds an M.F.A. in creative writing from the University of Oregon.

GOR009950147
Becoming a Visible Man by Jamison Green
Jamison Green
Used - Very Good
Hardback
Vanderbilt University Press
2004-06-30
264
0826514561
9780826514561
Short-listed for Lambda Literary Awards (Transgender) 2004
Book picture is for illustrative purposes only, actual binding, cover or edition may vary.
This is a used book - there is no escaping the fact it has been read by someone else and it will show signs of wear and previous use. Overall we expect it to be in very good condition, but if you are not entirely satisfied please get in touch with us.