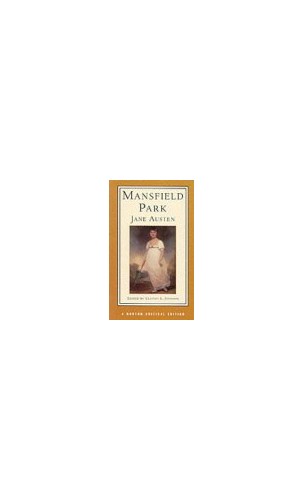 Used Price
Free Shipping in the UK
The text is that of a new authoritative text, which closely follows the one Austen oversaw when the novel was revised and reprinted in 1816.
Reviews:
Trustpilot
Very Good

Supporting materials include an introduction, annotations, and a map.

"Contexts" includes contemporary materials on the slave trade, religion, conduct literature for women, and landscape design that illuminate this dark and often disturbing novel. Elizabeth Inchbald's adaptation of Lovers' Vows (the play staged by the characters in Mansfield Park) is included, as are writings by Humphry Repton, Thomas Gisborne, Hannah More, and Mary Wollstonecraft, among others.

"Criticism" presents a superb selection of critical writing about the novel.

A Chronology and Selected Bibliography are included.

Jane Austen (1775-1817) was an English novelist whose works of romantic fiction, set among the gentry, earned her a place as one of the most widely read writers in English literature. Claudia L. Johnson is Professor of English at Princeton University. She is the author of Jane Austen: Women, Politics, and the Novel and Equivocal Beings: Politics, Gender, and Sentimentality in the 1790s, editor of the Mansfield Park Norton Critical Edition, and author of many articles on eighteenth-and nineteenth-century literature.

CIN000485762
Mansfield Park by Jane Austen
Jane Austen
Norton Critical Editions
Used - Very Good
Paperback
WW Norton & Co
1998-01-17
544
0393967913
9780393967913
N/A
Book picture is for illustrative purposes only, actual binding, cover or edition may vary.
This is a used book - there is no escaping the fact it has been read by someone else and it will show signs of wear and previous use. Overall we expect it to be in very good condition, but if you are not entirely satisfied please get in touch with us.