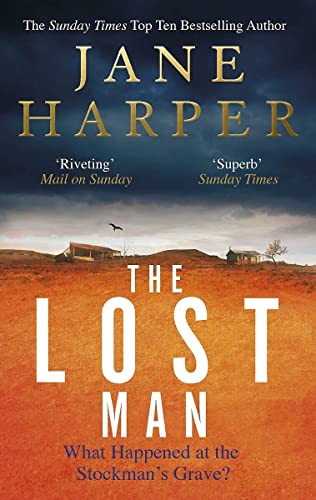 The Lost Man
by Jane Harper

Why did Cameron Bright die?

He had started to remove his clothes as logic had deserted him, and his skin was cracked. Whatever had been going through Cameron's mind when he was alive, he didn't look peaceful in death.

Two brothers meet at the remote border of their vast cattle properties under the unrelenting sun of the outback. In an isolated part of Australia, they are each other's nearest neighbour, their homes hours apart.

They are at the stockman's grave, a landmark so old that no one can remember who is buried there. But today, the scant shadow it casts was the last hope for their middle brother, Cameron. The Bright family's quiet existence is thrown into grief and anguish.

Something had been troubling Cameron. Did he choose to walk to his death? Because if he didn't, the isolation of the outback leaves few suspects...

PRAISE FOR THE LOST MAN

'Her best book yet' Evening Standard

'Harper's intricate, beautifully woven mystery...sucks you into a world where nothing is ever what it seems and everyone has secrets . . . Told with mesmerising skill' Daily Mail

Jane Harper is the author of the international bestsellers The Dry, Force of Nature and The Lost Man. Her books are published in more than 36 territories worldwide, and The Dry is being made into a major film starring Eric Bana. Jane has won numerous top awards including the CWA Gold Dagger Award for Best Crime Novel, the British Book Awards Crime and Thriller Book of the Year, the Australian Book Industry Awards Book of the Year and the Australian Indie Awards Book of the Year. Jane worked as a print journalist for thirteen years both in Australia and the UK and now lives in Melbourne.

GOR009857972
The Lost Man: the gripping, page-turning crime classic by Jane Harper
Jane Harper
Used - Very Good
Paperback
Little, Brown Book Group
2019-05-16
432
0349142130
9780349142135
Short-listed for LA Times Book Prize 2020 (UK)
Book picture is for illustrative purposes only, actual binding, cover or edition may vary.
This is a used book - there is no escaping the fact it has been read by someone else and it will show signs of wear and previous use. Overall we expect it to be in very good condition, but if you are not entirely satisfied please get in touch with us.