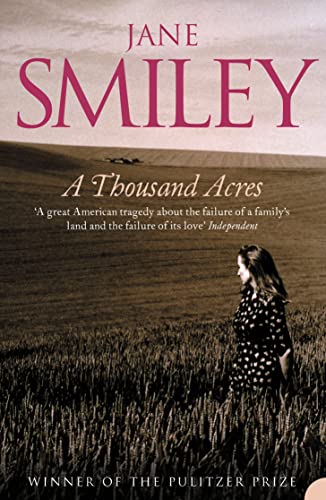 A Thousand Acres
by Jane Smiley

The Pulitzer Prize-winning, bestselling novel from one of America's greatest contemporary writers.

A Thousand Acres by Jane Smiley

The Pulitzer Prize-winning, bestselling novel from one of America's greatest contemporary writers.

Larry Cook's farm is the largest in Zebulon County, Iowa, and a tribute to his hard work and single-mindedness. Proud and possessive, his sudden decision to retire and hand over the farm to his three daughters, is disarmingly uncharacteristic.

Ginny and Rose, the two eldest, are startled yet eager to accept, but Caroline, the youngest daughter, has misgivings. Immediately, her father cuts her out.

In A Thousand Acres, Jane Smiley transposes the King Lear story to the modern day, and in so doing at once illuminates Shakespeare's original and subtly transforms it. This astonishing novel won both of America's highest literary awards, the Pulitzer Prize for Fiction and the National Book Critics' Circle Award.

`A Thousand Acres is a strong, gnarled shocker of a novel... superb. Its success is down to Smiley's ambitious gusto, her intuitive handling of the relationship between character and landscape, and her willingness to haul genuine moral freight across the panorama she has so expertly painted.' Sunday Times

`A studied, ingenious variation on the brutal clashing of sexes and generations in King Lear. Its style is relaxed, conversational, unhurried; the novel flows gently onwards like a broad river. In its solidity and poise, A Thousand Acres is a book that will outlast this year's rainy season.' Vogue
`Powerful, poignant, intimate and involving.' New York Times

Jane Smiley is one of America's greatest contemporary novelists. The author of seven other novels, she taught at Iowa State University before moving to California to concentrate on her writing.

GOR000469505
A Thousand Acres by Jane Smiley
Jane Smiley
Used - Very Good
Paperback
HarperCollins Publishers
1992-09-01
400
0006544827
9780006544821
Winner of Pulitzer Prize for Fiction 1992 Winner of Pulitzer Prize Novel Category 1992
Book picture is for illustrative purposes only, actual binding, cover or edition may vary.
This is a used book - there is no escaping the fact it has been read by someone else and it will show signs of wear and previous use. Overall we expect it to be in very good condition, but if you are not entirely satisfied please get in touch with us.