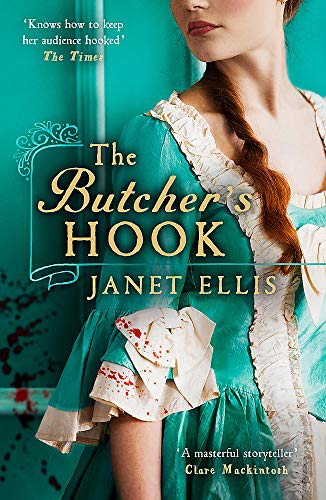 The Butcher's Hook
by Janet Ellis

The debut novel by actress and presenter Janet Ellis, The Butcher's Hook is the dark and twisted tale of a young girl in 18th-century London determined to take her life in her own hands.
No matter the cost.

The Butcher's Hook: a dark and twisted tale of Georgian London by Janet Ellis

'KNOWS HOW TO KEEP HER AUDIENCE HOOKED' The Times
'A MASTERFUL STORYTELLER' Clare Mackintosh
'DARK, WEIRD AND GLORIOUSLY FEMINIST' Elle

Georgian London, in the summer of 1763.
At nineteen, Anne Jaccob, the elder daughter of well-to-do parents, meets Fub the butcher's apprentice and is awakened to the possibilities of joy and passion.
Anne lives a sheltered life: her home is a miserable place and her parents have already chosen a more suitable husband for her than Fub.
But Anne is an unusual young woman and is determined to pursue her own happiness in her own way...
...even if that means getting a little blood on her hands.

*And Janet Ellis's second, darkly compelling novel, How It Was, is out now*

Janet Ellis has given us a tale set in Georgian London which possesses all the well-plotted intrigue and gritty reality of these great predecessors (Dickens' Bleak House and Bronte's Jane Eyre) - yet Ellis' heroine has a steely determination to break out of the constraints of her circumstances and get the man she wants at any cost.
This is a distinctly original novel of a young woman's sexual awakening... She is savvy enough to see the shortcomings of those around her and play them to her own advantage. Anne's narrative is so vivid it invokes the sensory experience of the time period and the unsavoury habits of those around her... Ellis writes so well about that all-consuming infatuation we've all felt in first love. It's not romanticized, but deeply physical and tied to a strident rejection of Anne's circumstances... It's refreshing to read about a character set in this time period that is in many ways sympathetic, yet is also capable of horrifyingly monstrous acts. The drama escalates throughout the novel making it an increasingly gripping read as the story progresses... Janet Ellis has created a fierce, memorable heroine and an inventive atmospheric story. It has all the richness of Dickensian detail and the modern flair of Sarah Waters. I also have to mention that the cover design and colour of this book is exceptionally beautiful.

Actress, presenter and author Janet Ellis trained at the Royal Central School of Speech and Drama. Best known for presenting Blue Peter, she stars in numerous radio and TV programmes and in 2018 appeared at the Edinburgh Festival. In 2016 Janet was awarded an MBE for services to charities and theatre. A graduate of the Curtis Brown creative writing course, her debut novel, The Butcher's Hook, was longlisted for the Desmond Elliott Prize. janetellis.com twitter.com/missjanetellis instagram.com/missjanetellis

GOR007828506
The Butcher's Hook: a dark and twisted tale of Georgian London by Janet Ellis
Janet Ellis
Used - Very Good
Paperback
Hodder & Stoughton General Division
2016-10-06
368
1473625157
9781473625150
Long-listed for Desmond Elliott Prize 2016
Book picture is for illustrative purposes only, actual binding, cover or edition may vary.
This is a used book - there is no escaping the fact it has been read by someone else and it will show signs of wear and previous use. Overall we expect it to be in very good condition, but if you are not entirely satisfied please get in touch with us.