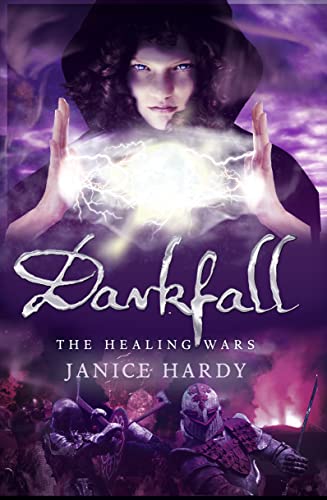 Nya lives in a world of pain.
A kidnapped sister, a war-crazy tyrant and the dangerous power she dreads to wield darken her dreams. But Nya must face her ultimate fear - she must unleash her blue fire...

Nya lives in a world of pain.
A kidnapped sister, a war-crazy tyrant and the dangerous power she dreads to wield darken her dreams. But Nya must face her ultimate fear - she must unleash her blue fire...

Nya makes an epic return to her ravaged city of Geveg in a desperate attempt to find her kidnapped sister, Tali, and to overthrow the evil Duke for ever.

As she and her friends makes the perilous journey across occupied land, Nya begins to transcend her orphaned outsider state to embody the face of Gevegian resistance, and a cult of worshippers grows around her.

But can Nya live up to the expectations of the Sainters' cult, and will she cave in to the temptation of manipulating them with her new-found powers in her bid to oust the Duke from power?

An almighty battle against the Duke and his armies of Undying, awaits her and Nya must face losing more than ever before...

Praise for THE SHIFTER: Fantasy fans and those who just love a good story will enjoy this fast-paced novel and eagerly await book two.--School Library Journal

GOR004426230
Darkfall (The Healing Wars, Book 3) by Janice Hardy
Janice Hardy
The Healing Wars
Used - Very Good
Paperback
HarperCollins Publishers
2012-03-29
304
0007326858
9780007326853
N/A
Book picture is for illustrative purposes only, actual binding, cover or edition may vary.
This is a used book - there is no escaping the fact it has been read by someone else and it will show signs of wear and previous use. Overall we expect it to be in very good condition, but if you are not entirely satisfied please get in touch with us.