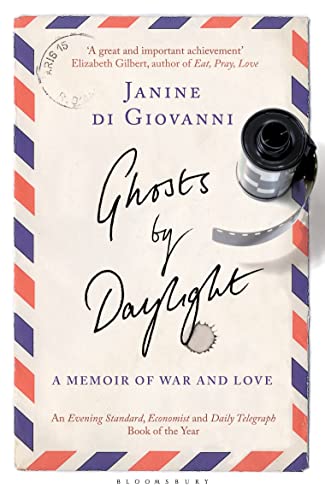 Ghosts By Daylight: A Memoir of War and Love by Janine Di Giovanni

Janine and Bruno first fell in love as young reporters in the besieged city of Sarajevo. Years later - after endless phone calls, much of what the French call malentendu, secret trysts in foreign cities, numerous break-ups, three miscarriages, countless stories of rebel armies and a dozen wars that had passed between them - they arrive in Paris one rainy January to begin a new life together. The remnants of their separate lives, now left behind, are tentatively unpacked into their shared apartment on the Right Bank: Bruno's heavy blanket from Ethiopia, a set of long feathered arrows from Brazil, an ash tray stolen from a hotel in Algeria, and Janine's flak-jacket and canvas boots, still full of sand from the Western Desert in Iraq. But having met in another lifetime - in another world - ordinary, civilian life doesn't come easily. War has become part of them: it had brought them together, and, though both are damaged by it, neither can quite leave it behind. And the difficult journey that follows, through their mix of joy and terror at becoming parents, Bruno's battle with post-traumatic stress and addiction, and Janine's determination to make France her home, leads to an understanding of the truth that people who deeply love each other cannot always live together. A searing, profoundly moving love letter, beautifully written, Ghosts by Daylight is a powerfully raw portrait of marriage and motherhood in the aftermath of war.
'Janine di Giovanni writes with unblinking courage about war, death, marriage, motherhood, loss, love, redemption, fear - indeed, about all the world's most pressing risks and dangers ... Her writing here (as ever in her remarkable career) is a great and important achievement' * Elizabeth Gilbert *
'Gripping and brilliantly done' * The Times *
`A vivid, heartfelt book that shows the extremes of life lived to the full' * Tatler *
`Unashamedly romantic, and combining quiet reflection with pacy narrative, di Giovanni looks at love with the same clear eye she brings to war' * Economist *
Janine di Giovanni is senior foreign correspondent for The Times and contributing editor for Vanity Fair. She has won Granada Television's 'Foreign Correspondent of the Year' award, the National Magazine Award and two Amnesty International Media Awards. She is the author of four books, Against the Stranger, The Quick and the Dead, Madness Visible and The Place at the End of the World. Janine di Giovanni lives in Paris.
GOR004112232
9781408822319
1408822318
Ghosts By Daylight: A Memoir of War and Love by Janine Di Giovanni
Janine Di Giovanni
Used - Very Good
Paperback
Bloomsbury Publishing PLC
2012-03-01
288
N/A
Book picture is for illustrative purposes only, actual binding, cover or edition may vary.
This is a used book - there is no escaping the fact it has been read by someone else and it will show signs of wear and previous use. Overall we expect it to be in very good condition, but if you are not entirely satisfied please get in touch with us
Trustpilot