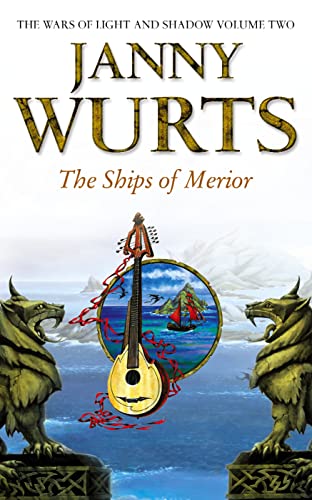 The Ships of Merior
by Janny Wurts

The Ships of Merior Summary

The Ships of Merior (The Wars of Light and Shadow, Book 2) by Janny Wurts

The half-brothers Arithon, Master of Shadow, and Lysaer, Lord of Light, have defeated the Mistwraith and dispersed the fogs that smothered Athera's skies. But their victory comes at a high price: the Mistwraith has set them at odds under a powerful curse of vengeance. The two princes are locked in deadly enmity, with the fates of nations and the balance of the world's mystical powers entangled in their feud.

Arithon, forced out of hiding, finds himself hounded by Lysaer and his mighty army. He must take to his natural element - the seas - in order to evade pursuit and steal the initiative. However, his efforts are impeded by outside magical factions, not to mention a drunken prophet sent to safeguard his life, but who seems determined to wreck his cause by misadventure.

The Ships of Merior Reviews

Janny Wurts is the author of the Cycle of Fire series, co-author of the worldwide bestselling Empire series with Raymond E. Feist, and is currently working on the Wars of Light and Shadow series. She often paints her own covers and is also and expert horsewoman, sailor, musician and archer.

GOR001216390
The Ships of Merior (The Wars of Light and Shadow, Book 2) by Janny Wurts
Janny Wurts
The Wars of Light and Shadow
Used - Very Good
Paperback
HarperCollins Publishers
1995-03-07
752
0586210709
9780586210703
N/A
Book picture is for illustrative purposes only, actual binding, cover or edition may vary.
This is a used book - there is no escaping the fact it has been read by someone else and it will show signs of wear and previous use. Overall we expect it to be in very good condition, but if you are not entirely satisfied please get in touch with us.