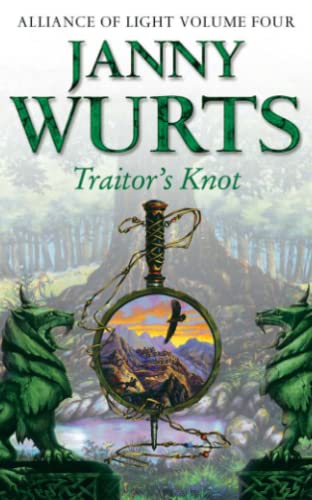 The gripping penultimate instalment of the Alliance of Light.

Traitor's Knot: Fourth Book of The Alliance of Light (The Wars of Light and Shadow, Book 7) by Janny Wurts

The gripping penultimate instalment of the Alliance of Light.

When half brothers Lysaer and Arithon defeated the Mistwraith its revenge left them cursed to lifelong enmity.

Having conquered the maze and acheived self-redemption, Arithon, Master of Shadow, is now the guest of the formidable sorcerer, Davien the Betrayor. No one knows how his influence will affect Arithon's recovered mage power, or his newly awakened rogue talent for prescience.

Meanwhile Arithon's relentless enemies will stop at nothing to acheive his downfall. The Koriani enchantresses are determined to make him their captive and their pawn. And as the Alliance of Light fanatics regroup after their defeat, the core of their priesthood now stands corrupted by a dark cabal who plot to enslave their leader, Lysaer, and use the Mistwraith's curse as their own private weapon to break the world's order.

The sorcerers of the Fellowship compact are sorely beset and the clans are counting their ruinous losses. Arithon, who holds their last hope of survival, chooses the most dangerous course: heart and mind he dedicates himself to avoiding killing, though allies and enemies muster for war, single-mindedly blind to the consequences.

Janny Wurts is the author of the Cycle of Fire series, co-author of the worldwide bestselling Empire series with Raymond E. Feist, and is currently working through the Wars of Light and Shadow series. She often paints her own covers and is also an expert horsewoman, sailor, musician and archer

GOR001213409
Traitor's Knot: Fourth Book of The Alliance of Light (The Wars of Light and Shadow, Book 7) by Janny Wurts
Janny Wurts
The Wars of Light and Shadow
Used - Very Good
Paperback
HarperCollins Publishers
2005-08-01
656
0007101147
9780007101146
N/A
Book picture is for illustrative purposes only, actual binding, cover or edition may vary.
This is a used book - there is no escaping the fact it has been read by someone else and it will show signs of wear and previous use. Overall we expect it to be in very good condition, but if you are not entirely satisfied please get in touch with us.