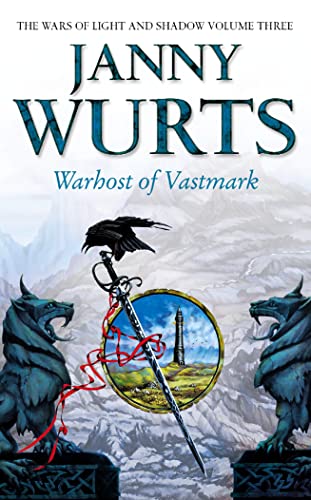 Warhost of Vastmark (The Wars of Light and Shadow, Book 3) by Janny Wurts

Tricked once more by his wily half-brother, Lysaer, Lord of Light, arrives at the tiny harbour town of Merior to find that Arithon's ship yards have been abandoned and meticulously destroyed, and that the Master of Shadow has disappeared as if into thin air.

Meanwhile Arithon and the Mad Prophet Dakar are travelling on foot through the treacherous Kelhorn Mountains towards the Vastmark clans, there to raise further support for his cause. But raising a warhost is a costly business. Is it mere coincidence that Princess Talith - Lysaer's beautiful, headstrong wife - is taken captive and held for a vast ransom by a master brigand?

The forces of light and shadow circle and feint, drawing ever closer to a huge conflict. And in the background the Fellowship of Seven Sorcerers and the Koriani Enchantresses watch and plan, and wait...

Janny Wurts is the author of the Cycle of Fire series, co-author of the worldwide bestselling Empire series with Raymond E. Feist, and is currently working on the Wars of Light and Shadow series. She often paints her own covers and is also an expert horsewoman, sailor, musician and archer.

GOR001213406
Warhost of Vastmark (The Wars of Light and Shadow, Book 3) by Janny Wurts
Janny Wurts
The Wars of Light and Shadow
Used - Very Good
Paperback
HarperCollins Publishers
1995-10-14
576
0006482074
9780006482079
N/A
Book picture is for illustrative purposes only, actual binding, cover or edition may vary.
This is a used book - there is no escaping the fact it has been read by someone else and it will show signs of wear and previous use. Overall we expect it to be in very good condition, but if you are not entirely satisfied please get in touch with us.