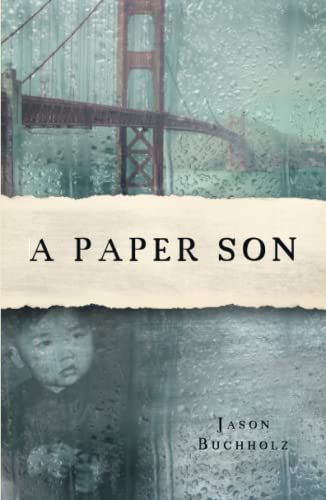 A Paper Son
by Jason Buchholz

In Stock
£7.49
Grade school teacher and aspiring author Peregrine Long sees a Chinese family on board a ship--in his morning tea. The image inspires him to write the story of this family, but then a woman turns up at his door, claiming that he's writing her family history exactly as it happened.
Very Good
Only 1 left

A Paper Son by Jason Buchholz

Grade school teacher and aspiring author Peregrine Long sees a Chinese family on board a ship--in his morning tea. The image inspires him to write the story of this family, but then a woman turns up at his door, claiming that he's writing her family history exactly as it happened. She doesn't like it, but she has one question: What happened to the little boy of the family, her long-lost uncle?

Throughout the course of a month-long tempest that begins to wash the peninsula out from beneath them, Peregrine searches modern-day San Francisco and its surroundings--and, through his continued writing, southern China and the Pacific immigration experience of a century ago--for the missing boy. The clues uncovered lead Peregrine to question not only the nature of his writing, but also his knowledge of his own past and his understanding of his identity.

"A Paper Son is a rivetingly imaginative debut full of deft humor and an affinity for the peculiar reminiscent of Auster and Calvino." --Jim Ruland, author of Forest of Fortune

"Buchholz's first novel showcases an imagination turned up to 11. I dig books that keep me guessing, keep me gasping with every new page, each new reveal that contorts Realism into something vitally new. I was wonderfully off balance reading A Paper Son. You've never experienced anything like this." --Joshua Mohr, author of All This Life

"A Paper Son is a fascinating exploration of blurred lines. Lines blurred between the past and present, of the real and imagined, of yearning and deliverance. A fine debut by Jason Buchholz. --Reed Farrel Coleman, New York Times Bestselling author of Robert B. Parker's The Devil Wins

"A prophetic and engrossing supernatural thriller examining how memory surfaces after a near death experience.... A Paper Son is a magical journey through memory and history.... What makes Buchholz's debut sing is...how the characters handle and rise above their exceptional circumstances to come to terms with a painful and forgotten period of Asian American history. Jason Buchholz's debut is a mesmerizing thriller of memory, loss and identity." --Shelf Awareness

"In a very different kind of thriller, Jason Buchholz's captivating debut novel delves into myth, memory and family connections. Time is fluid in this supernatural story, which travels from present-day San Francisco to rural China in the 1920s." --The San Jose Mercury News

Jason Buchholz is an editor, writer, and artist. His poetry and short fiction have appeared in Gobbledegook and Switchback. He holds a BA in psychology from UC Berkeley and an MFA in creative writing from the University of San Francisco. He lives in El Cerrito with his wife and son.

GOR009955738
A Paper Son by Jason Buchholz
Jason Buchholz
Used - Very Good
Paperback
Adams Media Corporation
2016-01-01
320
1440591628
9781440591624
N/A
Book picture is for illustrative purposes only, actual binding, cover or edition may vary.
This is a used book - there is no escaping the fact it has been read by someone else and it will show signs of wear and previous use. Overall we expect it to be in very good condition, but if you are not entirely satisfied please get in touch with us.