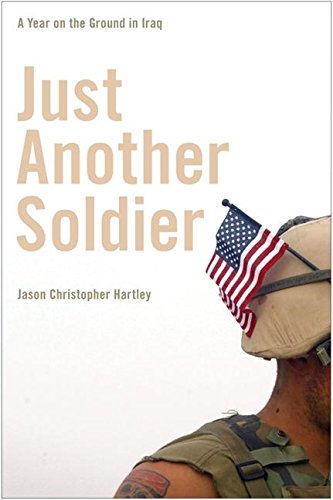 In Stock
£2.99
A personal view of the war in Iraq by an infantryman in the Army National Guard puts a human face on the business of war and the military, offering a day-to-day account of his experiences, capturing the boredom, horrors, fears, and exhilaration of war in the trenches. 50,000 first printing.
Very Good
Only 2 left

Just Another Soldier: A Year on the Ground in Iraq by Jason Christopher Hartley

This is not your father's war

This is Iraq, where a soldier's first duty is reinforcing his Humvee with sheet metal and sand bags. Or, in the absence of plumbing, burning barrels of human waste. Where any dead dog on the side of the road might be concealing an insurgent's bomb and anyone could be the enemy.

At age 17, Jason Christopher Hartley joined the Army National Guard. Thirteen years later, he is called to active duty, to serve in Iraq. Sent to a town called Ad Dujayl, made notorious by Saddam Hussein's 1982 massacre, Hartley is thrust into the center of America's war against terrorism. This is his story.

"If you are distrustful of the media and want to know exactly what's going on in Iraq, you'll have to pray for divine enlightenment, because only god knows what the hell is going on over here. However, if you want to know how it feels to be a soldier in Iraq, to hear something honest and raw, that I can help you with."

Sometimes profane, often poignant, and always nakedly candid, Just Another Soldier takes the reader past the images seen on CNN and the nightly news, into the day to day reality of life on the ground as an infantryman, attached to the 1st Division, in the first war of the 21st century. From the adrenaline rush of storming a suspected insurgent's house, to the sheer boredom of down time on the base, to the horror of dead civilians, Hartley examines his role as a man, as a soldier and as an American on foreign soil. His quest to discover the balance between his compassionate side and his baser instincts, results in a searing portrait of today's Army and a remarkable personal narrative written in a fresh and exciting new voice. Just Another Soldier is more than a war story; it delivers an intimate look at a generation of young men and women on the front lines of American policy.

Whether you're for or against the war in Iraq, this is essential reading.

"This is, in Hartley's words, 'something honest and raw.'"--Deseret News
"Profane, insightful, funny, exasperating, occasionally philosophical, usually down and dirty and a book to be remembered."--St. Louis Post-Dispatch
"Exposes the tedium of war and the slow disillusionment of a veteran infantryman"--People
"Often emotional, always full of vivid description and, above all, compelling."--Charleston Post & Courier

Born and raised in Salt Lake City, Jason Christopher Hartley is a member of the Army National Guard. He lives in New Paltz, New York. His website contains many of the photographs he shot of the war in Iraq.

GOR005618380
Just Another Soldier: A Year on the Ground in Iraq by Jason Christopher Hartley
Jason Christopher Hartley
Used - Very Good
Hardback
Unknown
0
0060843667
9780060843663
N/A
Book picture is for illustrative purposes only, actual binding, cover or edition may vary.
This is a used book - there is no escaping the fact it has been read by someone else and it will show signs of wear and previous use. Overall we expect it to be in very good condition, but if you are not entirely satisfied please get in touch with us.