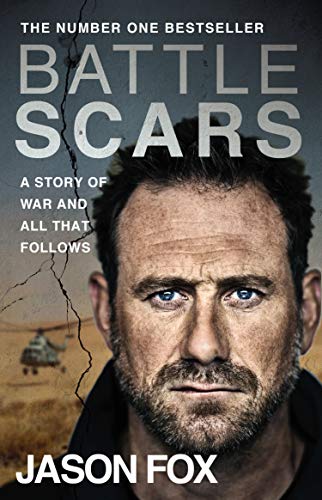 Battle Scars: A Story of War and All That Follows by Jason Fox

THE EXTRAORDINARY NUMBER ONE BESTSELLER.

'The most important book you'll ever read... Battle Scars will save lives.' TOM MARCUS, author of SOLDIER SPY

Battle Scars tells the story of Jason Fox's career as an elite operator, from the gunfights, hostage rescues, daring escapes and heroic endeavours that defined his service, to a very different kind of battle that awaited him at home.

After more than two decades of active duty, Foxy was diagnosed with complex PTSD, forcing him to leave the military brotherhood and confront the hard reality of what follows. What happens when you become your own enemy? How do you keep on fighting when life itself no longer feels worth fighting for?

Unflinchingly honest, Battle Scars is a breathtaking account of Special Forces soldiering: a chronicle of operational bravery, and of superhuman courage on and off the battlefield.

'A vivid, searing account of a life at war.' BEAR GRYLLS

'A must read.' ANT MIDDLETON, bestselling author of FIRST MAN IN.

A must read. * Ant Middleton *
The most important book you'll ever read... Battle Scars will save lives. * Tom Marcus, author of SOLDIER SPY *
A vivid, searing account of a life at war, that tells of some incredible moments of strength and courage. * Bear Grylls *
Get hold of a copy of Battle Scars. A brutally honest account of war and all that follows from the perspective of a Special Forces soldier. * Andy McNab *

Jason Fox joined the Royal Marine Commandos at sixteen, serving for ten years, after which he passed the gruelling selection process for the Special Forces, serving with the Special Boat Service for over a decade and reaching the rank of Sergeant.

Today you are most likely to find him gracing our television screens and giving us a taste of action and adventure around the world.

GOR009780524
Battle Scars: A Story of War and All That Follows by Jason Fox
Jason Fox
Used - Very Good
Paperback
Transworld Publishers Ltd
2019-05-16
384
055217601X
9780552176019
N/A
Book picture is for illustrative purposes only, actual binding, cover or edition may vary.
This is a used book - there is no escaping the fact it has been read by someone else and it will show signs of wear and previous use. Overall we expect it to be in very good condition, but if you are not entirely satisfied please get in touch with us.