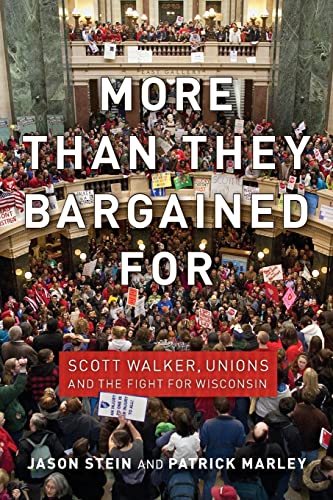 More than They Bargained For
by Jason Stein

More than They Bargained For Summary

More than They Bargained For: Scott Walker, Unions and the Fight for Wisconsin by Jason Stein

When Wisconsin became the first state in the nation in 1959 to let public employees bargain with their employers, the legislation catalysed changes to labour laws across the country. In March 2011, when newly elected governor Scott Walker repealed most of that labour law and subsequent ones - and then became the first governor in the nation to survive a recall election fifteen months later - it sent a different message. Both times, Wisconsin took the lead, first empowering public unions and then weakening them. This book recounts the battle between the Republican governor and the unions.

The struggle drew the attention of the country and the notice of the world, launching Walker as a national star for the Republican Party and simultaneously energising and damaging the American labour movement. Madison was the site of one unprecedented spectacle after another: 1:00 a.m. parliamentary manoeuvres, a camel slipping on icy Madison streets as union firefighters rushed to assist, massive nonviolent street protests, and a weeks-long occupation that blocked the marble halls of the Capitol and made its rotunda ring.

Jason Stein and Patrick Marley, award-winning journalists for the Milwaukee Journal Sentinel, covered the fight firsthand. They centre their account on the frantic efforts of state officials meeting openly and in the Capitols elegant backrooms as protesters demonstrated outside. Conducting new in-depth interviews with elected officials, labour leaders, police officers, protestors, and other key figures, and drawing on new documents and their own years of experience as statehouse reporters, Stein and Marley have written a gripping account of the wildest sixteen months in Wisconsin politics since the era of Joe McCarthy. They offer new insights on the origins of Walker's wide-ranging budget-repair bill, which included the provision to end public-sector collective bargaining; the Senate Democrats' decision to leave the state to try to block the bill; Democrats' talks with both union leaders and Republicans while in Illinois; and the reasons why compromise has become, as one Republican dissenter put it, a ""dirty word"" in politics today.

More than They Bargained For Reviews

"For better and worse, divided Wisconsin has been at the forefront of American politics recently, and to understand what happened and why, Jason Stein and Patrick Marley's deeply reported and illuminating book is an invaluable resource." David Maraniss, Madison native and author of Barack Obama: The Story"
"An important work that offers behind-the-scenes details on the institutional players most involved in the events leading up to and following Governor Scott Walker's introduction of his explosive collective bargaining bill. It will be of great interest to those who have followed the drama closely as well as to lay readers." Judith Davidoff, news editor, Isthmus"
Stein and Marley deliver an impressively objective account of the struggle, ably describing the objectives and tactics of each side in a confident and engaging style. Kirkus Reviews"
Stein and Marley deliver a swashbuckling tale of Wisconsin's Republican Governor Scott Walker's election and tumultuous first year in office...instead of an expected dry read, the authors' lively, economical prose, supplemented by snippets of social media reporting in real time, place readers in the crowded Capitol building stairwells, or in the midst of Wisconsin's largest sustained demonstration since Vietnam protests rocked the University of Wisconsin campus. Publishers Weekly"
This book is a political thriller, an activists handbook (for the Left on how to organize mass protests, and for the Right on how to effectively fight public employee unions), and a work of investigative journalism all rolled into one. Social scientists, political junkies, and anyone interested in public affairs will devour it. Library Journal"
Not only have Stein and Marley organized this mass of material into a coherent whole, but they also write well, ensuring that even the drier parts of their narrative are clear as well as fair. Their book provides plenty of ammunition for both sides. But it also offers something far better: the basis for an adult conversation about what actually happened. Milwaukee Journal Sentinel"
Veteran statehouse reporters, Stein and Marley had better access to the players, and better insight into the process, than all but a handful of observers. And they bring to the reporting a keen eye for nuance that reveals more than any press conference or official vote. The Capital Times"

Stein previously covered politics and business for the Wisconsin State Journal and has received national recognition for his reporting. He is a past president of the Wisconsin Capitol Correspondents Association.

GOR009961940
More than They Bargained For: Scott Walker, Unions and the Fight for Wisconsin by Jason Stein
Jason Stein
Used - Very Good
Paperback
University of Wisconsin Press
2013-04-15
248
029929384X
9780299293840
N/A
Book picture is for illustrative purposes only, actual binding, cover or edition may vary.
This is a used book - there is no escaping the fact it has been read by someone else and it will show signs of wear and previous use. Overall we expect it to be in very good condition, but if you are not entirely satisfied please get in touch with us.