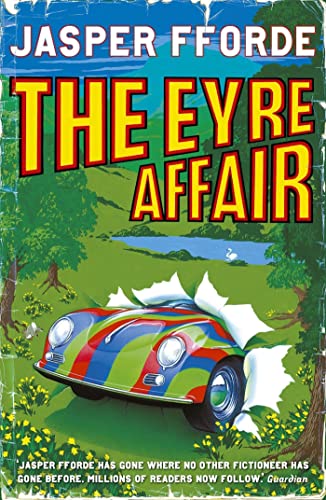 The Eyre Affair
by Jasper Fforde

In Stock
£5.49
The Eyre Affair is Jasper Fforde's first novel, and the debut of a fresh and delightfully original new voice.
Very Good Good
13 in stock

The Eyre Affair: Thursday Next Book 1 by Jasper Fforde

The first book in the phenomenally successful Thursday Next series, from Number One bestselling author Jasper Fforde.

'Always ridiculous, often hilarious ... blink and you miss a vital narrative leap. There are shades of Douglas Adams, Lewis Carroll, 'Clockwork Orange' and '1984'. And that's just for starters' - Time Out

Meet Thursday Next, literary detective without equal, fear or boyfriend.

There is another 1985, where London's criminal gangs have moved into the lucrative literary market, and Thursday Next is on the trail of the new crime wave's MR Big.

Acheron Hades has been kidnapping certain characters from works of fiction and holding them to ransom. Jane Eyre is gone. Missing.

Thursday sets out to find a way into the book to repair the damage. But solving crimes against literature isn't easy when you also have to find time to halt the Crimean War, persuade the man you love to marry you, and figure out who really wrote Shakespeare's plays.

Perhaps today just isn't going to be Thursday's day. Join her on a truly breathtaking adventure, and find out for yourself. Fiction will never be the same again ...

It's 1985 in England, at least on the calendar; the Crimean War is in its hundred-and-thirty-first year; time travel is nothing new; Japanese tourists slip in and out of Victorian novels; and the literary branch of the special police, led gamely by the beguiling Thursday Next, are pursuing Acheron Hades, who has stolen the manuscript of "Martin Chuzzlewit" and set his sights on kidnapping the character Jane Eyre, a theft that could have disastrous consequences for Bronte lovers who like their story straight. This rambunctious caper could be taken as a warning about what might happen if society considered literature really important-like, say, energy futures or accounting. * The New Yorker *
"Neatly delivers alternate history, Monty Pythonesque comedy skits, Grand Guignol supervillains, thwarted lovers, po-mo intertextuality, political commentary, time travel, vampires, absent-minded inventors, a hard-boiled narrator, and lots, lots more. . . . Suspend your disbelief, find a quiet corner and just surrender to the storytelling voice of the unstoppable, ever-resourceful Thursday Next." * The Washington Post *
"Fforde's imaginative novel will satiate readers looking for a Harry Potter-esque tale. . . . The Eyre Affair's literary wonderland recalls Douglas Adams's Hitchhikers series, the works of Lewis Carroll and Woody Allen's The Kugelmass Episode." * USA Today *
[Thursday Next is] part Bridget Jones, part Nancy Drew, and part Dirty Harry. -- Michiko Kakutani * New York Times *
Delightfully clever . . . Filled with clever wordplay, literary allusion and bibliowit, The Eyre Affair combines elements of Monty Python, Harry Potter, Stephen Hawking and Buffy the Vampire Slayer, but its quirky charm is all its own * Wall Street Journal *
Jasper Fforde's first novel, The Eyre Affair, is a spirited sendup of genre fiction-it's part hardboiled mystery, part time-machine caper-that features a sassy, well-read 'Special Operative in literary detection' named Thursday Next, who will put you more in mind of Bridget Jones than Miss Marple. Fforde delivers almost every sentence with a sly wink, and he's got an easy way with wordplay, trivia, and inside jokes. . . . Fforde's verve is rarely less than infectious * The New York Times Book Review *
What Fforde is pulling is a variation on the classic Monty Python gambit: the incongruous juxtaposition og low comedy and high erudition - this scam has not been pulled off with such off-hand finesse and manic verve since the Pythons shut up shop. 'The Eyre Affair' is a silly book for smart people: postmodernism played as raw, howling farce * Independent *
It is always a privilege to watch the birth of a cult, and Hodder has just cut the umbilical cord. Always ridiculous, often hilarious ... blink and you miss a vital narrative leap. There are shades of Douglas Adams, Lewis Carroll, 'Clockwork Orange' and '1984'. And that's just for starters * Time Out *
Ingenious - I'll watch Jasper Fforde nervously * Terry Pratchett *
Surely a cult in the making * Marie Clare *

Jasper Fforde's first novel was publishing to astonishing critical and commercial success in 2001. Since then he has written 3 other Thursday next novels, and is working on the first in a new series of crime novels. Jasper lives near Hay-on-Wye and flies Tiger Moth aeroplanes as relaxation.

GOR000925726
The Eyre Affair: Thursday Next Book 1 by Jasper Fforde
Jasper Fforde
Thursday Next
Used - Very Good
Paperback
Hodder & Stoughton General Division
2001-07-19
384
034073356X
9780340733561
Short-listed for WH Smith Book Awards (New Talent) 2002
Book picture is for illustrative purposes only, actual binding, cover or edition may vary.
This is a used book - there is no escaping the fact it has been read by someone else and it will show signs of wear and previous use. Overall we expect it to be in very good condition, but if you are not entirely satisfied please get in touch with us.