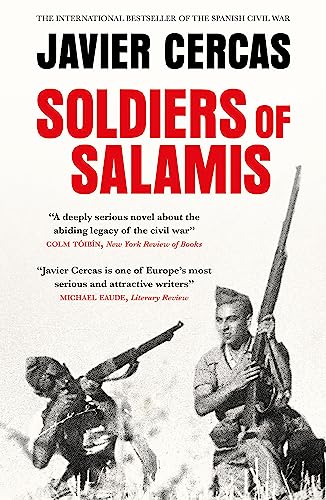 Soldiers of Salamis
by Javier Cercas

Soldiers of Salamis by Javier Cercas

In the final moments of the Spanish Civil War, fifty prominent Nationalist prisoners are executed by firing squad. Among them is the writer and fascist Rafael Sanchez Mazas. As the guns fire, he escapes into the forest, and can hear a search party and their dogs hunting him down. The branches move and he finds himself looking into the eyes of a militiaman, and faces death for the second time that day.

But the unknown soldier simply turns and walks away. Sanchez Mazas becomes a national hero and the soldier disappears into history. As Cercas sifts the evidence to establish what happened, he realises that the true hero may not be Sanchez Mazas at all, but the soldier who chose not to shoot him. Who was he? Why did he spare him? And might he still be alive?

A truly wonderful, magnificent novel. It is understanding, intelligent, compassionate . . . If you were required to read only one book about Spain and its civil war, this should be that book. -- Allan Massie * Scotsman. *
Very few novels have the power to alter received opinion, but this marvellous book may well be one . . . A remarkable book. -- Anne Chisholm * Sunday Telegraph *
This is an important, fresh and original book ... Above all, it demonstrates how eloquent and exciting fiction is still capable of being. -- Eileen Battersby * Irish Times *
This is a masterly parable of political violence, of suffering, but also, and decisevely, of the strange logic of compassion and healing . . . should become a classic -- George Steiner
With irresistible directness and delicacy, Javier Cercas engages in a quick-witted, tender quest for truth and the possibility of reconciliation in history, in our everyday lives - which happens to be the theme of most great European fiction . . . a marvellous novel -- Susan Sontag
He has succeeded, with one perfectly crafted book, in single-handedly redeeming the epic genre -- Alberto Manguel

Javier Cercas was born in 1962. He is a novelist, short-story writer and columnist, whose books include Soldiers of Salamis (which sold more than a million copies worldwide, won six literary awards in Spain and was filmed by David Trueba), The Tenant and The Motive, The Speed of Light and The Anatomy of a Moment. His books have been translated into more than twenty languages. He lives in Barcelona.

GOR009850179
Soldiers of Salamis by Javier Cercas
Javier Cercas
Used - Like New
Paperback
Quercus Publishing
2019-04-04
240
085705919X
9780857059192
N/A
Book picture is for illustrative purposes only, actual binding, cover or edition may vary.
The book has been read, but looks new. The book cover has no visible wear, and the dust jacket is included if applicable. No missing or damaged pages, no tears, possible very minimal creasing, no underlining or highlighting of text, and no writing in the margins.