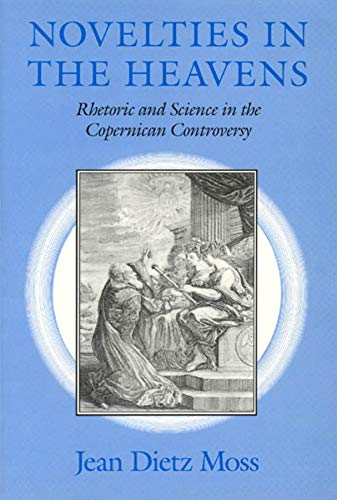 Novelties in the Heavens
by Jean Dietz Moss

Novelties in the Heavens Summary

Novelties in the Heavens: Rhetoric and Science in the Copernican Controversy by Jean Dietz Moss

In this fascinating work, Jean Dietz Moss shows how the scientific revolution begun by Copernicus brought about another revolution as well--one in which rhetoric, previously used simply to explain scientific thought, became a tool for persuading a skeptical public of the superiority of the Copernican system.

Moss describes the nature of dialectical and rhetorical discourse in the period of the Copernican debate to shed new light on the argumentative strategies used by the participants. Against the background of Ptolemy's Almagest, she analyzes the gradual increase of rhetoric beginning with Copernicus's De Revolutionibus and Galileo's Siderius nuncius, through Galileo's debates with the Jesuits Scheiner and Grassi, to the most persuasive work of all, Galileo's Dialogue. The arguments of the Dominicans Bruno and Campanella, the testimony of Johannes Kepler, and the pleas of Scriptural exegetes and the speculations of John Wilkins furnish a counterpoint to the writings of Galileo, the centerpiece of this study.

The author places the controversy within its historical frame, creating a coherent narrative movement. She illuminates the reactions of key ecclesiastical and academic figures figures and the general public to the issues.

Blending history and rhetorical analysis, this first study to look at rhetoric as defined by sixteenth- and seventeenth-century participants is an original contribution to our understanding of the use of persuasion as an instrument of scientific debate.

GOR009969406
Novelties in the Heavens: Rhetoric and Science in the Copernican Controversy by Jean Dietz Moss
Jean Dietz Moss
Used - Very Good
Paperback
The University of Chicago Press
1993-01-01
368
0226542351
9780226542355
N/A
Book picture is for illustrative purposes only, actual binding, cover or edition may vary.
This is a used book - there is no escaping the fact it has been read by someone else and it will show signs of wear and previous use. Overall we expect it to be in very good condition, but if you are not entirely satisfied please get in touch with us.