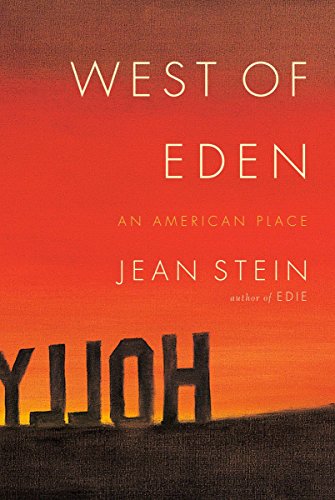 West of Eden
by Jean Stein

In Stock
£5.99
A story about money, power, fame and terrible secrets: the doomed Hollywood of the late Fifties, early Sixties - 'the rotten heart of paradise'. It is an oral history told through edited interviews. It's a book full of sex, drugs and celebrity glamour; and more.
Very Good
Only 3 left

West of Eden by Jean Stein

`A selective, sly history of studioera Hollywood... This is undoubtedly one of the best books ever written about the movies.' The Number One Daily Telegraph Book of the Year West of Eden is the definitive story of Hollywood, told, in their own words, by the people on the inside: Lauren Bacall, Arthur Miller, Dennis Hopper, Frank Gehry, Ring Lardner, Joan Didion, Stephen Sondheim - all interviewed by Jean Stein, who grew up in the Forties in a fairytale mansion in the Hollywood Hills. The book takes us from the discovery of oil in the Twenties with the story of the tycoon Edward Doheny (There Will Be Blood) and traces the growth of corruption through the syndicates, the mob, and the movie studios - from the beginnings of the film industry to the end, with News Corp. and Rupert Murdoch (who bought the Stein mansion in 1985). West of Eden is about money, power, fame and terrible secrets: the doomed Hollywood of the late Fifties, early Sixties - `the rotten heart of paradise'. Like her last book, the best-selling Edie, this is an oral history told through brilliantly edited interviews. As this is Hollywood, it's a book full of sex, drugs and celebrity glamour; but because it's built from the firsthand accounts of people who were actually there, many of them writers, actors and artists, it's also strangely claustrophobic, seductive, and completely compelling.

"One of the best books ever written about the movies." * Daily Telegraph, Book of the Year #1 *
"Selective and sly, personal and political - and by far one of the best books ever written about Hollywood... The stories are vivid and the voices as clear as if the speakers were still alive... Like reading a secret diary and looking at a geologist's diagram at the same time: with each intimate revelation, the precise stratification of the world's most glamorous and closed society becomes clear." -- Gaby Wood * Daily Telegraph *
"The best book ever done on the terrifying social dysfunction of the beautiful people... [Stein] is clear-eyed and knows where the bodies are buried... Though all "true", this book reads like a dream... A spellbinding record of that ancien regime." -- David Thomson * New Statesman *
"The dark side of Tinseltown - the fame, the fortunes, the secrets - told by those in the know... Stein edits together the dizzying array of interviews she has collected, weaving them into a subtly revealing oral history that illuminates Hollywood life from the 1920s to the 1990s." -- Victoria Segal * Sunday Times *
"A gripping story of money, power and fame... Highly entertaining stuff packed with memorable anecdotes." -- Sebastian Shakespeare * Tatler *
"A saga, like Steinbeck's version of Genesis, about family squabbles and sins passed down, along with money, from one generation to the next." -- Peter Conrad * Observer *
"Absorbing oral history of Hollywood... A tantilisingly intimate portrait of a handful of families whose very different experiences together sum up Tinseltown to a T." -- Brian Viner * Daily Mail *
"Stein's style is addictive: briskly intercut (rarely does one voice claim a full page), unafraid that gossipy asides will lessen its gravity. And like Chandler, like James Ellroy, like Kenneth Anger's Hollywood Babylon and Nathanael West's Day of the Locust, West of Eden sees something primally rotten in the bedrock of the city." -- Danny Leigh * Financial Times *
"This is the book Hollywood has been waiting for... Gripping and stealthily emotive... An astonishing collection of voices... Read this and you'll never turn onto Doheny Drive in the sunshine again without thinking about this gilded, glittering city's identity as a fascinating and troubled invention of the 20th century." -- Olivia Cole * GQ *
"Jean Stein's book deploys a wonderful grace in uncovering a monstrous reality - it tells brilliant stories, sometimes very personal ones, and lets their accretion work its own magic... A wild compendium of stories about what it is to be a child in a world of childish adults, and her book feels political, a meditation on the moral consequences of being looked after by powerful monsters with sick egos." -- Andrew O'Hagan * London Review of Books *
"It crackles and sparks." -- Christopher Bray * Literary Review *
"To my mind, the best biography of the year is Jean Stein's West of Eden" -- Gaby Wood * Daily Telegraph, Book of the Year *
"To my mind, the best biography of the year is Jean Stein's West of Eden" -- Gaby Wood * Daily Telegraph, Book of the Year *
"An investigation into a gorgeous atmosphere." -- Adam Thirlwell * Times Literary Supplement, Book of the Year *
"Real-life tales of vintage Hollywood." * Esquire *
"The seedy side of the golden age of Hollywood and Los Angeles is thrown into sharp relief in this fascinating oral history. Tales of the stars, the fallen idols, and the never-beens from the Twenties right up to the Nineties." * Daily Mail *
"This gossipy exploration of life in the gilded cage from one of its own is packed with anecdotes... Wealth, fame, beauty and status are a heady mix in Jean Stein's history of Hollywood told through the first-hand accounts of those who lived and worked there." -- Fiona Wilson * The Times *
"Monstrous behaviour and vanity suffuse this oral history of Hollywood's troubled dynasties... Tragedy lurks around the manicured lawns and marbled halls." -- Anthony Quinn * Guardian *
"The anecdotes come so thick and fast it's like being machine-gunned with marshmallows. Gradually, though, the mood darkens, the catalogue of vulgarity, cruelty and insanity takes its toll. While the Technicolor tour is relentlessly fascinating, it is reassuring to be shown in black and white that, in La-La Land at least, with the millions comes endless misery." -- Mark Sanderson * Evening Standard *
"Jean Stein's approach to family history is unconventional... Stein weaves them together with immense narrative skill." -- Christopher Silvester * Spears Wealth Management Survey *
"The stories are mesmerising... Great for people who want to see beyond the world of make-believe." -- William Leith * Evening Standard *
"A very dark oral history of Hollywood... mesmerising." * i *

Jean Stein's father, Jules, founded MCA and she grew up in the golden years of Hollywood. At Jean's coming-out party, Judy Garland sang `Over the Rainbow'; later she had an affair with William Faulkner, became an editor at The Paris Review, and was Elia Kazan's assistant on Cat on a Hot Tin Roof. Immersed in the demi-monde of New York, she was close to Andy Warhol and the Velvet Underground, and to Warhol's muse - Edie Sedgewick - about whom Lou Reed wrote `Femme Fatale' and Jean Stein wrote Edie (1982). That book became an international best-seller, of which Norman Mailer wrote: `This is the book of the Sixties that we have been waiting for.'

GOR007269929
West of Eden by Jean Stein
Jean Stein
Used - Very Good
Hardback
Vintage Publishing
2016-02-04
368
022410246X
9780224102469
N/A
Book picture is for illustrative purposes only, actual binding, cover or edition may vary.
This is a used book - there is no escaping the fact it has been read by someone else and it will show signs of wear and previous use. Overall we expect it to be in very good condition, but if you are not entirely satisfied please get in touch with us.