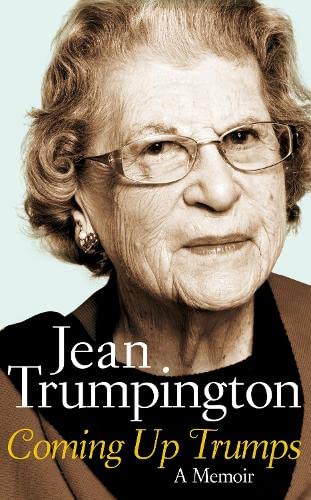 A riveting memoir from Lady Trumpington, doyenne of the House of Lords, taking her from 1920s London to her career in politics

In this characteristically trenchant memoir, the indomitable Jean Trumpington looks back on her long and remarkable life. The daughter of an officer in the Bengal Lancers and an American heiress, Jean Campbell-Harris was born into a world of considerable privilege, but the Wall Street Crash entirely wiped out her mother's fortune.

Leaving school at fifteen, without ever taking an exam, the young Jean Campbell-Harris was sent to Paris to study art and both French and German, but two years later, with the outbreak of the Second World War, she became a land girl - on a farm owned by Lloyd George, a family friend - however, she soon changed direction, joining naval intelligence at Bletchley Park, where she stayed for the rest of the war. After the war she worked first in Paris and then in New York, on Madison Avenue, with advertising's 'mad men'. It was in New York that she met her husband, the historian Alan Barker, and their marriage, in 1954, ushered in the happiest period of her life - bringing up her only son, Adam, and becoming a not entirely conventional headmaster's wife, before embarking on her distinguished political career, as a Cambridge City councillor, Mayor of Cambridge and, then, in 1980, a life peer.

Forthright, witty and deliciously opinionated, Coming Up Trumps is a wonderfully readable account of a life very well lived.

Jean Trumpington was born Jean Alys Campbell-Harris in 1922, the daughter of an officer in the 7th Hariana Lancers, who became aide-de-camp to the Viceroy of India, and an American heiress. Educated privately, she left school aged fifteen having never taken an exam. With the outbreak of the Second World War, she became first a land girl and then worked in naval intelligence. After the war, she moved to New York, where she met her husband, the historian and schoolmaster, William Barker. They returned to Britain and married in 1954, when Barker took up a post at the Leys School in Cambridge, becoming headmaster in 1958. Their only son was born in 1955. Jean Barker, as she then was, began her political career as a Cambridge City Councillor in the early 1960s, rising to become Mayor of Cambridge in 1971. In 1980 she was made a life peer, choosing the title of Baroness Trumpington of Sandwich. She has served in two Conservative governments, as Parliamentary Under-Secretary of State in the Department of Health and Social Security from 1985 to 1988 and as Minister of State in the Ministry of Agriculture, Fisheries and Food from 1989 to 1992, which, at the age of sixty-nine, made her the oldest female minister ever. Today, she is still an active member of the government front bench in the House of Lords and, in November 2012, aged ninety, was the oldest-ever guest to have appeared on Have I Got News for You. Widowed in 1988, Baroness Trumpington lives in Battersea.
GOR005743028
9781447256779
1447256778
Coming Up Trumps: A Memoir by Jean Trumpington
Jean Trumpington
Used - Very Good
Hardback
Pan Macmillan
2014-04-24
256
N/A
Book picture is for illustrative purposes only, actual binding, cover or edition may vary.
This is a used book - there is no escaping the fact it has been read by someone else and it will show signs of wear and previous use. Overall we expect it to be in very good condition, but if you are not entirely satisfied please get in touch with us
Trustpilot