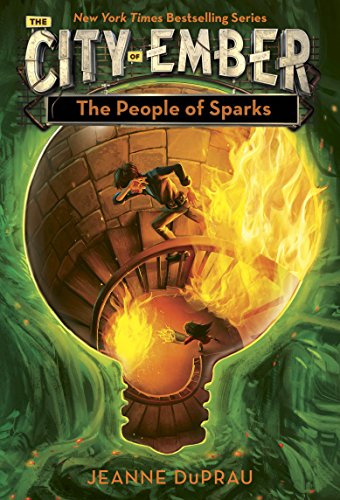 The People of Sparks
by Jeanne DuPrau

In Stock
£6.49
Having escaped to the Unknown Regions, Lina and the others seek help from the village people of Sparks.
Very Good
Only 3 left

The People of Sparks Summary

The People of Sparks by Jeanne DuPrau

Just when the future looks bright for the people of Ember, a new darkness lurks. This highly acclaimed adventure series is a modern-day classic--with over 4 MILLION copies sold!

Lina and Doon have led the citizens of Ember to an exciting new world. They've been given safe haven in a small village called Sparks, a place filled with color and life. But they're not out of danger yet. Although Sparks seems like the answer the long-suffering Emberites have been hoping for, tempers soon escalate. The villagers have never had to share their world before, and it only takes a tiny "spark" to ignite a battle between the two struggling groups. Lina and Doon will have to work together to avoid a disaster not only for their people, but also for the people of Sparks.

Praise for the City of Ember books:

"While Ember is colorless and dark, the book itself is rich with description." --VOYA, Starred

JEANNE DuPRAU is the New York Times bestselling author of the City of Ember books, which have been translated into multiple languages and are a time-honored staple in elementary school classrooms. She also wrote Escape the Vortex, part of the multiplatform sci-fi adventure series Voyagers. Visit her website at jeanneduprau.com.

GOR003656539
The People of Sparks by Jeanne DuPrau
Jeanne DuPrau
Used - Very Good
Paperback
Unknown
0
0375828257
9780375828256
N/A
Book picture is for illustrative purposes only, actual binding, cover or edition may vary.
This is a used book - there is no escaping the fact it has been read by someone else and it will show signs of wear and previous use. Overall we expect it to be in very good condition, but if you are not entirely satisfied please get in touch with us.