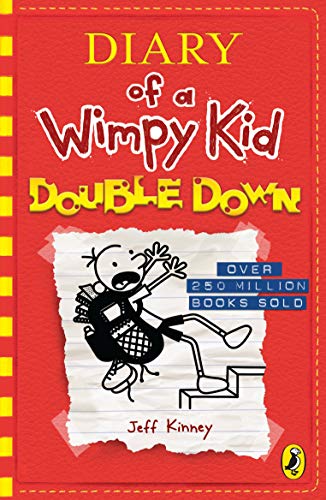 It's the eleventh book in the bestselling Diary of a Wimpy Kid series!

The pressure's really piling up on Greg Heffley. His mom thinks video games are turning his brain to mush, so she wants her son to put down the controller and explore his 'creative side'.

As if that's not scary enough, Halloween's just around the corner and the frights are coming at Greg from every angle.

When Greg discovers a bag of gummy worms, it sparks an idea. Can he get his mom off his back by making a movie . . . and will he become rich and famous in the process? Or will doubling down on this plan just double Greg's troubles?

Jeff Kinney (Author, Illustrator)
Jeff Kinney is the #1 USA Today, New York Times, and Wall Street Journal bestselling author of the Diary of a Wimpy Kid series and a six-time Nickelodeon Kids' Choice Award winner for Favorite Book. The Meltdown, book 13, was published in October 2018, and was a #1 bestselling book. His latest book, Diary of an Awesome Friendly Kid: Rowley Jefferson's Journal, was published in April 2019 and was an instant #1 global bestseller. Jeff has been named one of Time magazine's 100 Most Influential People in the World. He is also the creator of Poptropica, which was named one of Time's 50 Best Websites. He spent his childhood in the Washington, D.C., area and moved to New England in 1995. Jeff lives with his wife and two sons in Massachusetts, where they own a bookstore, An Unlikely Story.

GOR009475755
Diary of a Wimpy Kid: Double Down (Diary of a Wimpy Kid Book 11) by Jeff Kinney
Jeff Kinney
Diary of a Wimpy Kid
Used - Like New
Paperback
Penguin Books Ltd
2018-01-25
240
014137666X
9780141376660
N/A
Book picture is for illustrative purposes only, actual binding, cover or edition may vary.
The book has been read, but looks new. The book cover has no visible wear, and the dust jacket is included if applicable. No missing or damaged pages, no tears, possible very minimal creasing, no underlining or highlighting of text, and no writing in the margins.