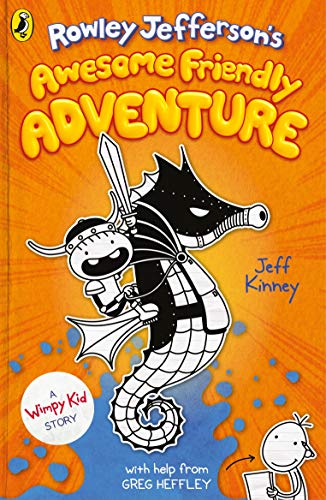 From the imagination of Wimpy Kid's Rowley Jefferson comes an adventure of epic proportions! Join Roland and his best friend, Garg the Barbarian, as they leave the safety of their village and embark on a quest to save Roland's mum from the White Warlock. Will our heroes survive? Find out in Rowley Jefferson's Awesome Friendly Adventure!

Praise for Jeff Kinney -- -
Kinney is right up there with J K Rowling as one of the bestselling children's authors on the planet -- Independent
The books contain meaty themes to do with family and friendship . . . more please -- The Telegraph
No-one does the straight to camera narrative style of the diary better than Kinney ... This is as authentic and funny as the original Wimpy Kid books and makes just as irresistible reading -- Andrea Reece * LoveReading4Kids Reviewer *

GOR010543755
Rowley Jefferson's Awesome Friendly Adventure by Jeff Kinney
Jeff Kinney
Used - Like New
Hardback
Penguin Random House Children's UK
2020-08-04
224
0241458811
9780241458815
N/A
Book picture is for illustrative purposes only, actual binding, cover or edition may vary.
The book has been read, but looks new. The book cover has no visible wear, and the dust jacket is included if applicable. No missing or damaged pages, no tears, possible very minimal creasing, no underlining or highlighting of text, and no writing in the margins.