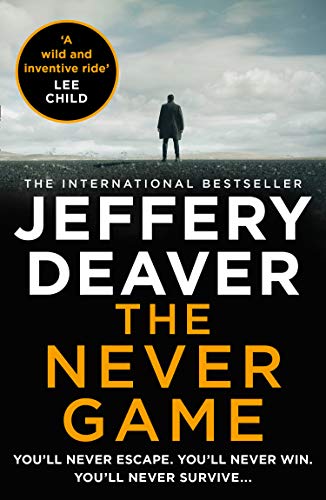 The Never Game
by Jeffery Deaver

Three people are kidnapped across California.

Sophie is locked inside a derelict warehouse.
Henry is abandoned in remote woodland.
Elizabeth is trapped inside a sinking ship.

They are alive, but don't have much time to live...

Only one man can save them: unique investigator Colter Shaw. He's an expert tracker with a forensic mind, but this will be a test even for him.

Because this killer isn't following the rules; he's changing them. One murder at a time...

Deaver's most riveting, most twisty, most unputdownable novel yet' Karin Slaughter

'The very definition of a page-turner' Ian Rankin

'Terrific writing, vivid and raw, Deaver grips from the very first line and never lets up. He is, hands-down, one of the finest thriller writers of our time' Peter James

'As always, Deaver gets you in his stealthy grip on page one, and then takes you on a wild and inventive ride ...
this time with new star character Colter Shaw. No one in the world does this kind of thing better than Deaver' Lee Child

'Masterful storytelling - The Never Game is Deaver's most riveting, most twisty, most unputdownable novel yet' Karin Slaughter

'Lightning-fast and loaded with twists, The Never Game is a thrill a minute from one of the best. Don't miss it' Harlan Coben

'Jeffery Deaver scores yet again with a fascinating new detective, Colter Shaw, and a plot as full of thrills and twists and turns as you would expect from him. With The Never Game you know you are in the hands of a master. But be warned-don't start this too late in the evening because sleep would be an annoying interruption once you've started reading!' Peter Robinson

'A twisty "keep you up all night" page-turner of a book with a wonderfully human core. A fantastic read' Kate Hamer, bestselling author of The Girl in the Red Coat

'A fascinating new character in the methodical Colter Shaw. Nothing is predictable in the case, and like a curvy mountain road, the twists are intense' Associated Press

'If you want thrills, Deaver is your man' Guardian

'One of the most consistent writers of clever, entertaining and often thought-provoking thrillers in the world' Simon Kernick

Jeffery Deaver is the No.1 international bestselling author of more than thirty novels, three collections of short stories, and a nonfiction law book. His books are sold in 150 countries and translated into 25 languages. His first novel featuring Lincoln Rhyme, The Bone Collector, was made into a major motion picture starring Denzel Washington and Angelina Jolie. He's received or been shortlisted for a number of awards around the world. A former journalist, folksinger, and attorney, he was born outside of Chicago and has a bachelor of journalism degree from the University of Missouri and a law degree from Fordham University. You can visit his website at www.JefferyDeaver.com.

GOR010384493
The Never Game (Colter Shaw Thriller, Book 1) by Jeffery Deaver
Jeffery Deaver
Colter Shaw Thriller
Used - Very Good
Paperback
HarperCollins Publishers
2020-03-19
480
0008303762
9780008303761
N/A
Book picture is for illustrative purposes only, actual binding, cover or edition may vary.
This is a used book - there is no escaping the fact it has been read by someone else and it will show signs of wear and previous use. Overall we expect it to be in very good condition, but if you are not entirely satisfied please get in touch with us.