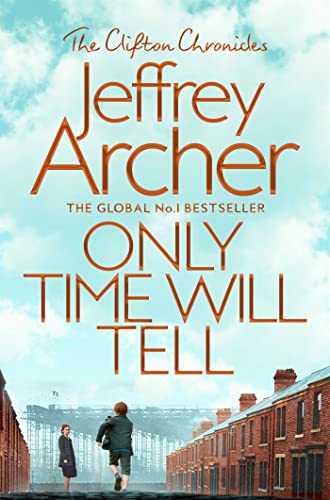 Only Time Will Tell
by Jeffrey Archer

Used Price
Free Shipping in the UK
The number one bestselling first book in The Clifton Chronicles, a multi-generational family saga.
Reviews:
Trustpilot
Like New

Only Time Will Tell Summary

Only Time Will Tell by Jeffrey Archer

Ambitious and addictive, Only Time Will Tell is the first novel in international bestseller Jeffrey Archer's the Clifton Chronicles begins the epic tale of Harry Clifton, a working-class boy from the docks of Bristol.

It is 1920, and against the backdrop of a world ravaged by conflict, Harry's story begins with the words 'I was told that my father was killed in the war'. Harry's existence is defined by the death of his father and he seems destined to a life on the docks until a remarkable gift wins him a scholarship to an exclusive boys school and entry into a world he could never have envisaged.

Over the course of twenty years, as the Second World War and the fight against Hitler draws nearer, Harry will learn the awful truth about his father's death and of his own connections to a powerful shipping family, the Barringtons. And in doing so, he will change his destiny forever . . .

Richly imagined and populated with remarkable characters, the Clifton Chronicles will take you on a powerful journey, bringing to life one hundred years of family history in a story neither you, nor Harry, could ever have dreamt of.

Customer Reviews - Only Time Will Tell

Only Time Will Tell Reviews

Archer is on top form * Daily Telegraph *
I enjoyed the book and marvelled at both its pace and the imaginative cliffhanger ending, whetting our appetite for volume two * Sunday Express *
This is a cracker of a read. And quite 'unputdownable'. The whole thing about Jeffrey is that he has always had the knack of producing page-turners -- Jerry Hayes * Spectator *
The ability to tell a story is a great - and unusual - gift . . . [it] is not something that can be taught or acquired. You have it or you don't . . . Jeffrey Archer is, first and foremost, a storyteller . . . You don't sell 250 million copies of your books (250 million!) if you can't keep an audience hooked - and that's what Archer does, book after book. Archer's audience will stick with him to the last. They want to know what happens next -- Erica Wagner, Literary Editor * The Times *

Jeffrey Archer, whose novels and short stories include the Clifton Chronicles, Kane and Abel and Cat O' Nine Tales, is one of the world's favourite storytellers and has topped the bestseller lists around the world in a career spanning four decades. His work has been sold in 97 countries and in more than 37 languages. He is the only author ever to have been a number one bestseller in fiction, short stories and non-fiction (The Prison Diaries).

Jeffrey is also an art collector, sports lover, and amateur auctioneer, conducting numerous charity auctions every year. A member of the House of Lords for over a quarter of a century, the author is married to Dame Mary Archer, and they have two sons, two grandsons and a granddaughter.

GOR010779198
Only Time Will Tell by Jeffrey Archer
Jeffrey Archer
The Clifton Chronicles
Used - Like New
Paperback
Pan Macmillan
2019-07-23
464
1509847561
9781509847563
N/A
Book picture is for illustrative purposes only, actual binding, cover or edition may vary.
The book has been read, but looks new. The book cover has no visible wear, and the dust jacket is included if applicable. No missing or damaged pages, no tears, possible very minimal creasing, no underlining or highlighting of text, and no writing in the margins.