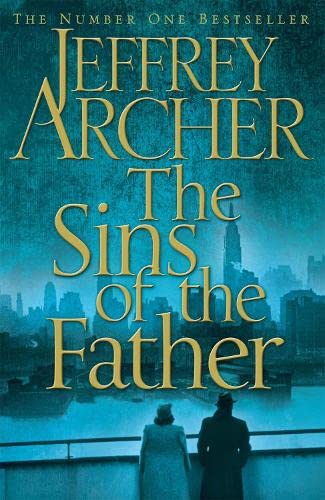 The Sins of the Father
by Jeffrey Archer

In Stock
£12.99
The master storyteller continues the Clifton saga with this, the second novel
Very Good Good
15 in stock

The Sins of the Father Summary

The Sins of the Father by Jeffrey Archer

New York, 1939. Tom Bradshaw is arrested for first degree murder. He stands accused of killing his brother. When Sefton Jelks, a top Manhattan lawyer, offers his services for nothing, penniless Tom has little choice but to accept his assurance of a lighter sentence. After Tom is tried, found guilty and sentenced, Jelks disappears, and the only way for him to prove his innocence would be to reveal his true identity - something that he has sworn never to do in order to protect the woman he loves.

Meanwhile, the young woman in question travels to New York, leaving their son behind in England, having decided she'll do whatever it takes to find the man she was to marry - unwilling to believe that he died at sea. The only proof she has is a letter. A letter that has remained unopened on a mantelpiece in Bristol for over a year.

In Jeffrey Archer's epic novel, family loyalties are stretched to their limits as secrets unravel, and the story moves from the backstreets of Bristol to the boardrooms of Manhattan.

The Sins of the Father Reviews

Praise for international bestselling author""JEFFREY ARCHER "One of the top ten storytellers in the world." --"Los Angeles Times" "There isn't a better storyteller alive." --Larry King"" "Archer plots with skill, and keeps you turning the pages." --"The Boston Globe" "Cunning plots, silken style.... Archer plays a cat-and-mouse game with the reader." --"The New York Times" "Archer is a master entertainer." --"Time" "A storyteller in the class of Alexandre Dumas...unsurpassed skill." --"Washington Post"

Jeffrey Archer, whose novels and short stories include Kane and Abel, A Prisoner of Birth and Cat O' Nine Tales, has topped the bestseller lists around the world, with sales of over 270 million copies. He is the only author ever to have been a number one bestseller in fiction (seventeen times), short stories (four times) and non-fiction (The Prison Diaries). The author is married with two sons and lives in London and Cambridge. www.jeffreyarcher.com Facebook.com/JeffreyArcherAuthor @Jeffrey_Archer

GOR003631931
The Sins of the Father by Jeffrey Archer
Jeffrey Archer
The Clifton Chronicles
Used - Very Good
Hardback
Pan Macmillan
2012-03-15
400
0230748236
9780230748231
N/A
Book picture is for illustrative purposes only, actual binding, cover or edition may vary.
This is a used book - there is no escaping the fact it has been read by someone else and it will show signs of wear and previous use. Overall we expect it to be in very good condition, but if you are not entirely satisfied please get in touch with us.