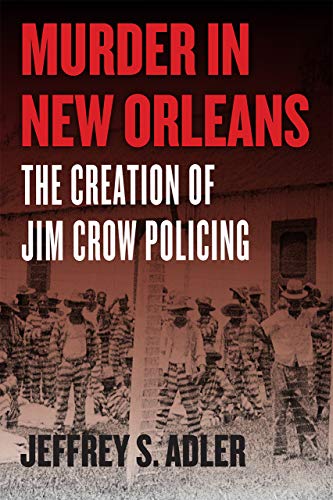 New Orleans in the 1920s and '30s was a deadly place. In 1925, the city's homicide rate was six times that of New York City and twelve times that of Boston, despite having a fraction of the population. Jeffrey S. Adler has explored every homicide officially recorded in New Orleans between 1925 and 1940--over two thousand in all--scouring police and autopsy reports, old interviews, and crumbling newspapers. More than simply quantifying these cases, Adler places them in larger contexts--legal, political, cultural, and demographic--and emerges with a tale of racism, urban violence, and vicious policing that has startling relevance for today. Murder in New Orleans shows how whites were convicted of homicide at far higher rates than blacks leading up the mid-1920s. But by the end of the next decade, this pattern had reversed completely, despite an overall plummet in municipal crime rates. This sharp rise in arrests was compounded by the increasingly harsh treatment of black subjects by New Orleans police, marked by acts of extreme brutality. Adler also explores counter-intuitive trends in violence, particularly how murder soared during the flush times of the Roaring Twenties, how it plummeted during the Great Depression, and how the vicious response to African American crime occurred as such violence plunged in frequency, revealing that the city's cycle of racial policing and punishment was connected less to actual patterns of wrongdoing than to the national enshrinement of Jim Crow. Rather than some hyperviolent outlier, this Louisiana city was a harbinger of the endemic racism at the center of today's criminal justice state. Murder in New Orleans lays bare how decades-old crimes, and the racially motivated cruelty of the official response, once again have baleful resonance in the age of Black Lives Matter.

"Murder in New Orleans is an important case study of racism in pre-World War II criminal justice that reveals how the past bleeds into the present."-- "Tony Platt, University of California, Berkeley"
"In this ambitious urban history, Adler authoritatively reconstructs the racist and violent policing forces in the Crescent City--he seems to leave no document unturned, unanalyzed, or uncontextualized. Prodigiously researched, Murder in New Orleans demonstrates that we must look to cities like New Orleans in the 1920s and 1930s if we hope to discover the origins of the nation's current carceral state."-- "Ibram X. Kendi, National Book Award-winning author of Stamped from the Beginning"
"Recommended. . . Murder in New Orleans reads like the script for a documentary film."-- "Choice"

Jeffrey Adler is professor of history and criminology, as well as distinguished teaching scholar at the University of Florida.

GOR010682163
Murder in New Orleans: The Creation of Jim Crow Policing by Jeffrey S Adler
Jeffrey S Adler
Historical Studies of Urban America
Used - Like New
Hardback
The University of Chicago Press
2019-08-20
280
022664331X
9780226643311
N/A
Book picture is for illustrative purposes only, actual binding, cover or edition may vary.
The book has been read, but looks new. The book cover has no visible wear, and the dust jacket is included if applicable. No missing or damaged pages, no tears, possible very minimal creasing, no underlining or highlighting of text, and no writing in the margins.