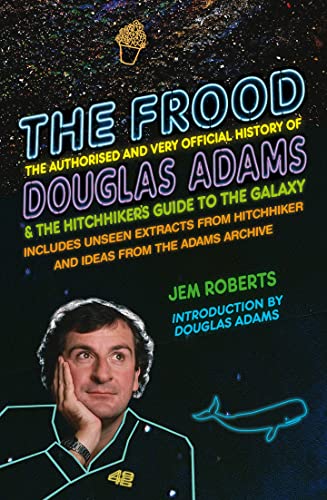 The Frood
by Jem Roberts

The Frood: The Authorised and Very Official History of Douglas Adams & The Hitchhiker's Guide to the Galaxy by Jem Roberts

As a wise ape once observed, space is big - vastly, hugely, mind-bogglingly so. However, if you look too closely at space, it becomes nothing but lumps of rock and sundry gases. Sometimes it's necessary to take a step back, and let a few billion years go by, before any of the true wonder and scope of the cosmos becomes apparent. Similarly, the late 20th century author, humorist and thinker Douglas Adams was big - vastly, hugely and thoroughly mind-bogglingly so, both in physical terms, and as a writer who has touched millions of readers, firing up millions of cerebellums all over planet Earth, for over 35 years - and for nearly half of that time, he hasn't even been alive. It would be ridiculous to pretend that Douglas Adams's life and work has gone unexamined since his dismayingly early death at 49 but throughout the decade since the last book to tackle the subject, the universes Adams created have continued to develop, to beguile and expand minds, and will undoubtedly do so for generations to come. An all-new approach to the most celebrated creation of Douglas Adams is therefore most welcome, and The Frood tells the story of Adams's explosive but agonizingly constructed fictional universe, from his initial inspirations to the posthumous sequel(s) and adaptations, bringing together a thousand tales of life as part of the British Comedy movements of the late 70s and 80s along the way. With the benefit of hindsight and much time passed, friends and colleagues have been interviewed for a fresh take on the man and his works.

"Jem manages to write about popular cultural institutions with knowledge and affection" * Stephen Fry *
"Jem, you're very charming, it's a pleasure to go on about it" * Barry Cryer *

Jem Roberts was born in Ludlow and studied English, Film & Television at Aberystwyth University. A lifetime in magazines led to the honour of writing his first book, the acclaimed Clue Bible, The Fully Authorised History of I'm Sorry I Haven't a Clue, whereupon a life-long adoration for Blackadder made this follow-up a must. This, his third book is probably the closest to heart. He lives in Bath, where he runs the comedy gang 'The Unrelated Family' and writes strange tales for young readers.

GOR006560867
The Frood: The Authorised and Very Official History of Douglas Adams & The Hitchhiker's Guide to the Galaxy by Jem Roberts
Jem Roberts
Used - Very Good
Paperback
Cornerstone
2014-09-25
480
1848094388
9781848094383
N/A
Book picture is for illustrative purposes only, actual binding, cover or edition may vary.
This is a used book - there is no escaping the fact it has been read by someone else and it will show signs of wear and previous use. Overall we expect it to be in very good condition, but if you are not entirely satisfied please get in touch with us.