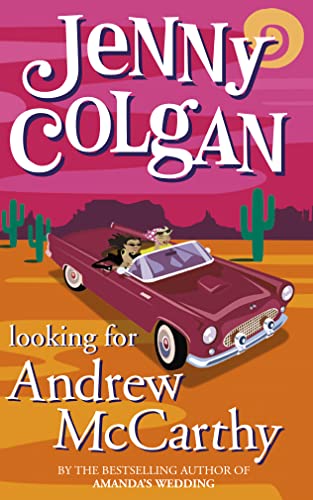 'I'm wearing a beautiful pink dress, and I'm in a big pink room with billowing curtains...and I'm dancing to Orchestral Manoeuvres in the Dark...and my handsome partner leans over and whispers...

'Yes, 80s child Ellie really thought life was going to be like Pretty in Pink, St Elmo's Fire and all those other movies - where everyone was astoundingly glamorous, popular, successful, had huge apartments and lived happily ever after. But now that she and her gang are thirty, she has to admit that things haven't quite turned out that way. When did horrible flats, difficult relationships and menaningless jobs take over?And, more importantly, what happened to the coolest, wisest, most inspirational Brat Packer of them all? Where is Andrew McCarthy now? Did life fulfil its promise for him? Is he happy on Channel 5? Surely he, of all people, can tell Ellie what to do about her thirty-angst?

Determined to get her idol to unravel some of life's great mysteries, Ellie sets out, unwillingly accompanied by her best friend Julia, on a quest across the USA, from LA to New York to find him. It's an unlikely epic, by turns hilarious, romantic and downright uncomfortable - but, helped by a cast of thousands, of whom Frosty the Giant Pig is probably the least improbable, they do find some answers, although not the ones they expected

'Colgan is on top form with this, her latest outrageous romp' Cosmopolitan

'Wonderful, warm and resonant for anyone who ever wondered what happened to teenage dreams' Hello!

'Jenny Colgan is one of the leaders of the pack and this, her third novel, will delight her legion of admirers...Fast-paced, funny, poignant and well-observed, it reads like a pastiche of the movies she loved...If a time capsule were buried to capture the world at the turn of the 21st century, this would be a candidate for inclusion' Daily Mail

'Did I like this book? Well, d'uh! Do hedgehogs have quills? A pure belter of a novel' Glasgow Herald

Jenny Colgan was born in 1971 in Ayrshire. After Edinburgh University, she worked for six years in the health service, moonlighting as a cartoonist and a stand-up comic. She is now working on her fourth novel, and a TV series.

GOR010507742
Looking for Andrew McCarthy by Jenny Colgan
Jenny Colgan
Used - Like New
Paperback
HarperCollins Publishers
2002-06-05
416
0007105533
9780007105533
N/A
Book picture is for illustrative purposes only, actual binding, cover or edition may vary.
This is a used book - there is no escaping the fact it has been read by someone else and it will show signs of wear and previous use. Overall we expect it to be in very good condition, but if you are not entirely satisfied please get in touch with us.