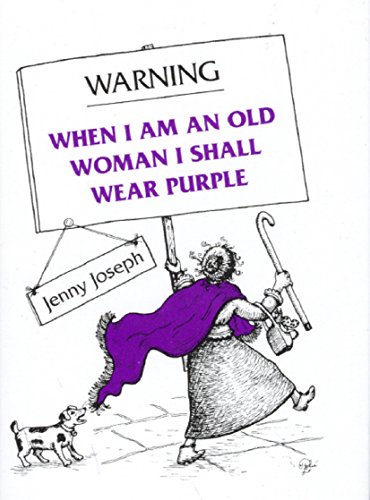 Warning: When I am an Old Woman I Shall Wear Purple by Jenny Joseph

Voted Britain's favourite poem in 1996, 'Warning', written in 1961, is known and loved the world over. Its declaration of defiance, so vividly and cleverly expressed, appeals to the rebel in all of us as we secretly yearn to throw off the shackles of propriety and enjoy the gleeful freedom of cocking a snook at the rest of the world. In the poem's respectable middle-aged woman, as she indulges in her fantasy of the gabby old crone with her outrageous clothes and dotty behaviour, Jenny Joseph has created a character whose thoughts have been quoted at conferences and funerals, used to cheer up sick friends, remembered with pleasure by children and adults alike. Found in schoolbooks from Alaska to Singapore, the poem has been stitched, stamped, quilted, set to music, printed on cards, written on cakes and made into films. Now, for the first time, 'Warning' appears as an illustrated book with drawings by Pythia Ashton-Jewell specially designed to suit its unique character.

A poem that was to inspire two generations of women to contemplate behaving badly. * Mail on Sunday *
The most popular poem in Britain. * Guardian *
Continues to inspire with its humour... speaks to the devil in us all... Utterly charming and uplifting. * Good Book Guide *

Jenny Joseph has been writing poetry since childhood and was first published in the 1950s by John Lehmann. Her first published collection, The Unlooked-for Season, won her a Cholmondeley Award and her prose and verse narrative, Persephone, the James Tait Black Memorial Prize. In 1995 she was awarded a Society of Authors Travelling Scholarship. In 2006 her poem 'Warning' was voted Britain's favourite modern poem. She has three grown-up children and lives in Gloucestershire. Pythia Ashton-Jewell has been a printer and opera-singer and is reading for a degree in Music while pursuing her career as writer and illustrator, mainly of children's books. She lives in London.

GOR010463258
Warning: When I am an Old Woman I Shall Wear Purple by Jenny Joseph
Jenny Joseph
Used - Like New
Hardback
Souvenir Press Ltd
1997-11-06
32
0285634119
9780285634114
N/A
Book picture is for illustrative purposes only, actual binding, cover or edition may vary.
The book has been read, but looks new. The book cover has no visible wear, and the dust jacket is included if applicable. No missing or damaged pages, no tears, possible very minimal creasing, no underlining or highlighting of text, and no writing in the margins.