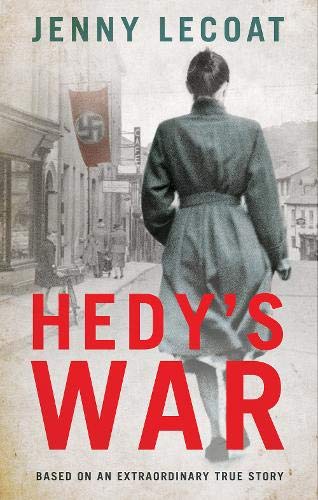 Used Price
£7.19
New RRP £8.99
Free Shipping in the UK
Based on an extraordinary true story, Jenny Lecoat's debut novel is a tense, emotional story of forbidden love, subterfuge and survival against the odds.
Reviews:
Trustpilot
Like New Very Good

In June 1940, the Channel Islands becomes the only part of Great Britain to be occupied by Hitler's forces. Hedy Bercu, a young Jewish girl from Vienna who fled to Jersey two years earlier to escape the Anschluss, finds herself once more entrapped by the Nazis, this time with no escape. Hedy's War follows her struggle to survive the Occupation and avoid deportation to the camps. Despite her racial status, Hedy finds work with the German authorities and embarks on acts of resistance. Most remarkable of all, she falls in love with a German lieutenant - a relationship on which her life soon comes to depend.

'A vividly evoked story of love surviving, even triumphing, over oppression'

'Hedy's War is a stimulating, emotional, and engaging novel, and has been chosen as one of our Debuts of the Month - a captivating, heartfelt and rewarding debut based on true events'

Born in Jersey, Channel Islands, Jenny Lecoat's parents were raised under German Occupation, and both families were involved in resistance activity. Lecoat moved to England aged 18, where, following a drama degree, she spent a decade on the alternative comedy circuit as a feminist stand-up. She was nominated for a prestigious Perrier Award in 1986. She also wrote for newspapers and women's magazines (Cosmopolitan, Observer) and presented TV and radio shows, before focusing on screen writing from sitcom (Birds of a Feather, Sometime Never) to sketch shows (The Catherine Tate Show.) A love of history and factual stories and a return to her island roots brought about her feature film Another Mother's Son (2017), which starred Jenny Seagrove and John Hannah, and attracted major coverage.

GOR010561255
Hedy's War by Jenny Lecoat
Jenny Lecoat
Used - Like New
Paperback
Birlinn General
2020-05-07
272
184697531X
9781846975318
N/A
Book picture is for illustrative purposes only, actual binding, cover or edition may vary.
The book has been read, but looks new. The book cover has no visible wear, and the dust jacket is included if applicable. No missing or damaged pages, no tears, possible very minimal creasing, no underlining or highlighting of text, and no writing in the margins.