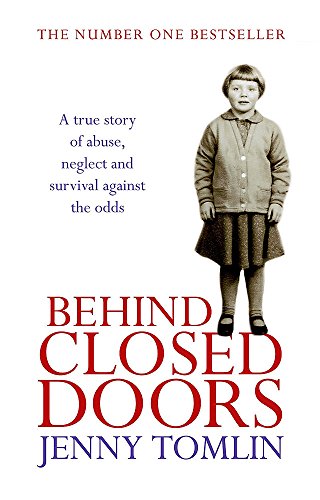 Behind Closed Doors
by Jenny Tomlin

In Stock
£3.99
The number one bestselling, heartbreaking childhood memoir of abuse and true story of the triumph of the human spirit.
Like New Very Good Good
Only 1 left

Behind Closed Doors by Jenny Tomlin

Jenny grew up in a house where no-one was safe. Born one of five children in the East End, her childhood was spent in squalor and terror. Her father's violent beatings, humiliations, and sexual abuse were part of daily life; her mother - also his sexual victim and savagely beaten - was no source of help.

Deprived of love and all comforts, the children would turn to each other for support and to the only adult they could trust, Auntie.

This is the story of how Jenny, her sister Kim and brother Laurence, not only survived but ultimately transcended the unimaginable degradations heaped on them. With the power of love, cunning, the blackest of black humour and an indestructible self-belief, Jenny eventually broke free of her past.

This woman is an inspiration and I am honoured to call her my mum * Martine McCutcheon *
I'm really proud of Jenny. She has put into words our terrible start in life and made me look openly at who I was and how far I have come. We managed to break free and build a life for oursleves. Now it's time to stop covering the subject in shame. * Kim Challoner, Jenny's sister *

Jenny Tomlin educated herself to A level standard and started writing a few years ago. She is now happily married and living in France. Her most fulfilling roles have been as loving wife to Alan and mother to her children - celebrated actress Martine McCutcheon and her son LJ - giving them the stability and love she never received herself.

GOR008020393
Behind Closed Doors by Jenny Tomlin
Jenny Tomlin
Used - Like New
Paperback
Hodder & Stoughton General Division
2006-02-13
288
0340837926
9780340837924
N/A
Book picture is for illustrative purposes only, actual binding, cover or edition may vary.
The book has been read, but looks new. The book cover has no visible wear, and the dust jacket is included if applicable. No missing or damaged pages, no tears, possible very minimal creasing, no underlining or highlighting of text, and no writing in the margins.