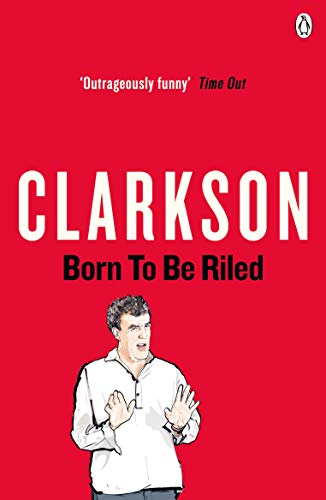 Born to be Riled
by Jeremy Clarkson

Out of Stock
Offers a collection of classic columns that takes a look at the world through the authors windscreen. In this book, the author explains: why Surrey is worse than Wales; how crossing your legs in America can lead to arrest; the reason cable TV salesmen must be punched; that divorce can be blamed on the birth of Jesus.
Very Good
Only 0 left

Born to be Riled Summary

Born to be Riled by Jeremy Clarkson

Born to be Riled is a collection of hilarious vintage journalism from Jeremy Clarkson.

Jeremy Clarkson, it has to said, sometimes finds the world a maddening place. And nowhere more so than from behind the wheel of a car, where you can see any number of people acting like lunatics while in control (or not) of a ton of metal.

In this collection of classic columns, first published in 1999, Jeremy takes a look at the world through his windscreen, shakes his head at what he sees - and then puts the boot in.

Among other things, he explains:

Raving politicians, pointless celebrities, ridiculous 'personalities' and the Germans all get it in the neck, together with the stupid, the daft and the ludicrous, in a tour de force of comic writing guaranteed to have Jeremy's postman wheezing under sackfuls of letters from the easily offended.

'Brilliant . . . laugh-out-loud' Daily Telegraph
'Outrageously funny . . . will have you in stitches' Time Out

Number-one bestseller Jeremy Clarkson writes on cars, current affairs and anything else that annoys him in his sharp and funny collections. Clarkson On Cars, Don't Stop Me Now, Driven To Distraction, Round the Bend, Motorworld and I Know You Got Soul are also available as Penguin paperbacks; the Penguin App iClarkson: The Book of Cars can be downloaded on the App Store.

Jeremy Clarkson because his writing career on the Rotherham Advertiser. Since then he has written for the Sun and the Sunday Times. Today he is the tallest person working in British television, and is the presenter of the hugely popular Top Gear.

Jeremy Clarkson began his career on the Rotherham Advertiser. Since then he has written for the Sun, the Sunday Times, the Rochdale Observer, the Wolverhampton Express & Star, all of the Associated Kent Newspapers and Lincolnshire Life.

GOR000386393
Born to be Riled by Jeremy Clarkson
Jeremy Clarkson
Used - Very Good
Paperback
Penguin Books Ltd
2007-01-25
576
0141028998
9780141028996
N/A
Book picture is for illustrative purposes only, actual binding, cover or edition may vary.
This is a used book - there is no escaping the fact it has been read by someone else and it will show signs of wear and previous use. Overall we expect it to be in very good condition, but if you are not entirely satisfied please get in touch with us.